Source code analysis of TaiWindCss based on postCss

When I first saw the TaiWindCss library, just from the css point of view, it is similar to the bootstrap I've been in contact with before. It's just a pure css style library. However, after in-depth understanding, I found that it is more convenient and very fine than bootstrap. The only feeling is that each style needs to be assembled by DIV, including a series of hover s, active and other effects. Later, I went deep into TaiWindCss and found that the css style library was actually a css file style library written in js code and compiled. I was shocked at that time. js can still operate like this. A little awesome!!! So I went to understand and view the source code of TaiWindCss in detail. Go deep into the implementation logic of this.

It has the following features and common functions:

The main principles and core workflows of PostCSS are as follows:

This series of workflows, to put it simply, is a series of operations on data. For this purpose, PostCSS provides a series of data operation APIs. For example, walkAtRules, walkComments, walkdecks, walkRules and other related APIs. See the following documents:
Official API document of postcss

From the perspective of the usage scenario of TaiWindCss time, we install TaiWindCss in the form of PostCSS plug-in. In essence, TaiWindCss is a PostCSS plug-in. From the perspective of actual project development, we have generally used PostCSS. At present, most popular / mainstream frameworks in the environment basically use PostCSS by default, For example, autoprefixer. We will basically use this.

For the use of PostCSS plug-ins, we generally need the following steps in the process of reuse:

After the relevant configuration is completed, in the process of project packaging or hot update, execute a series of PostCSS plug-ins to automatically package the relevant css referenced on our page into the css file we need, and then load it into our page.

Because we use a fragmented style file layout, such as the code on the page

These class types are highly granular and reusable, and TailwindCss will automatically delete all unused CSS when building production files, which means that your last CSS file may be the smallest.

First, we clearly understand the workflow of postCss: 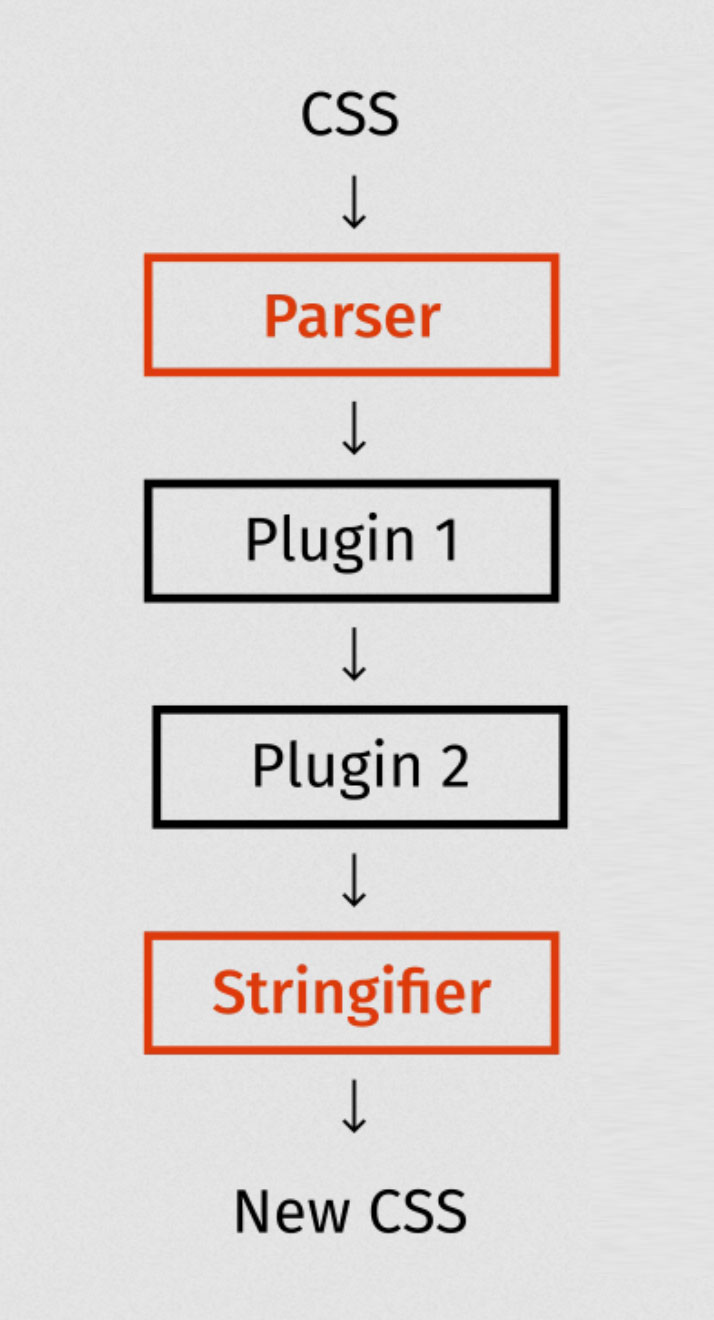 There are several key processing mechanisms in PostCSS: 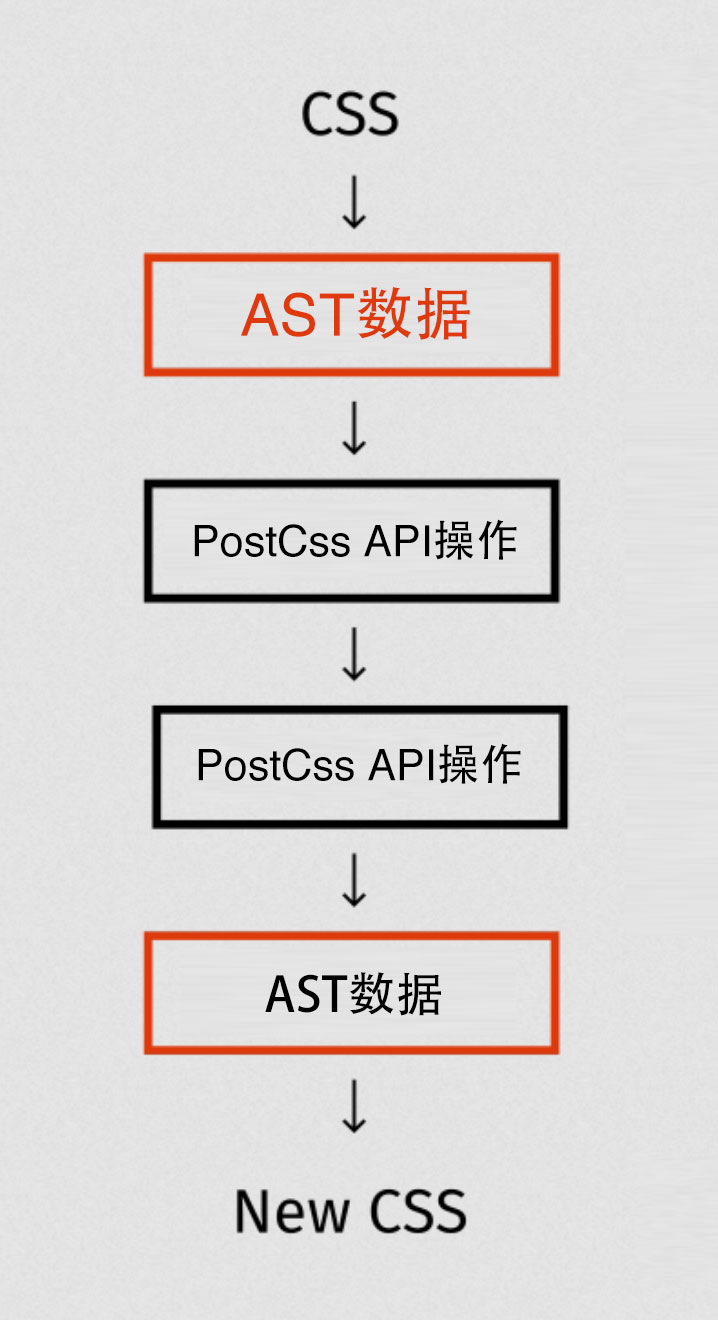 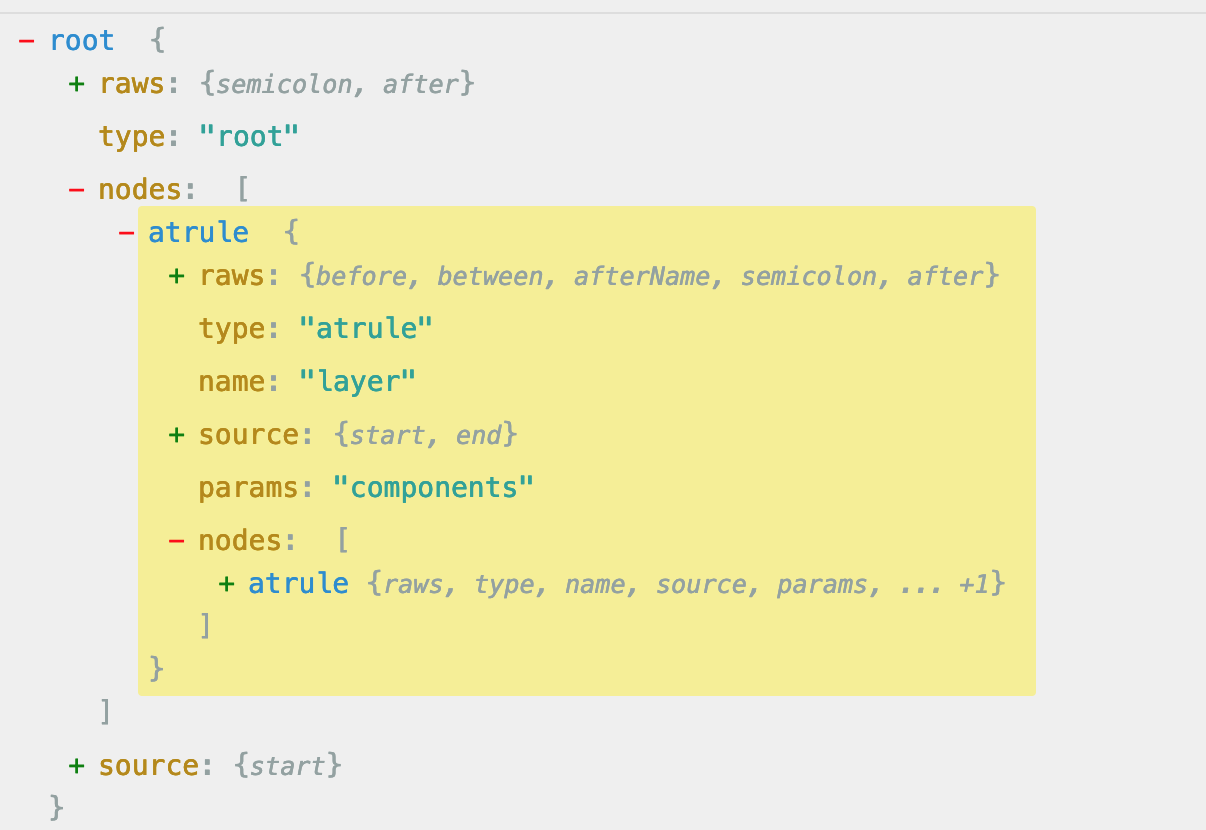 Repeated data operations, such as adding, deleting and adding, are to add data to the root - > nodes - > atrule / rule / comment / container / declaration - > nodes array. This series of operations uses a series of methods provided by the postCss document.

If we want to change the Css file into the following code:

Then we just need to put the following data: 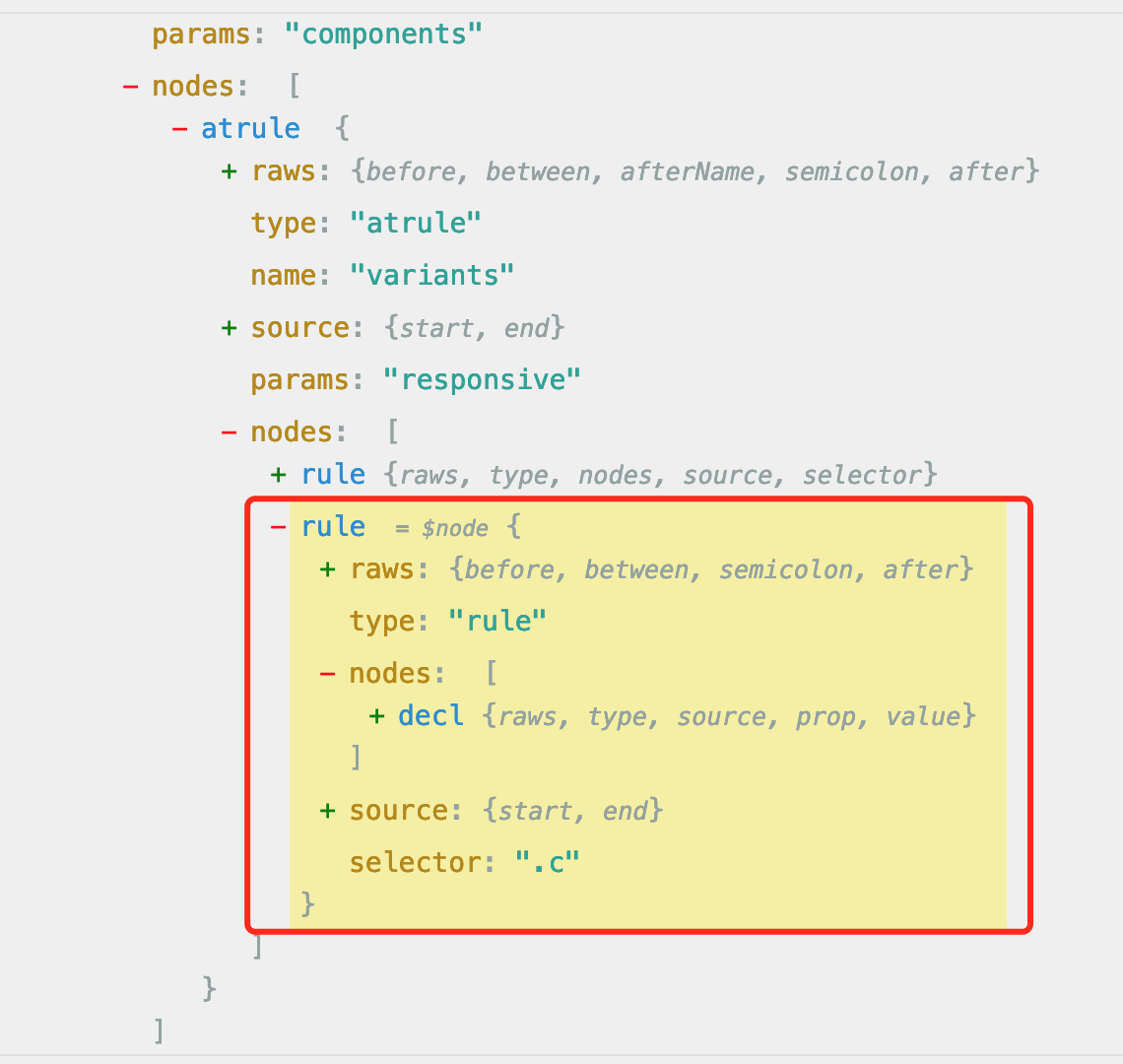 In the figure, the new target is the AST tree chart mechanism fed back after we access the data last time.

From the above, we basically understand the basic principle of the implementation of TaiWindCss. In fact, it is a series of operations on the data flow to get the final CSS module we want, and then eliminate the redundant code and convert it into the CSS file we want.

First, check the package.json file and find the scripts. The code is as follows:

Let's look at the line prepublishOnly, which is the entry point for the construction of TaiWindCss source code.

Find the project file scripts/build.js, and the core code is as follows:

The core code description is to pass the file name (base), read the CSS file in the project, and convert the CSS file through the postcss plug-in tailwindcss. Then the CSS file is everywhere.

It is worth noting that

File directory SRC - > index.js
The core code is as follows:

Is a series of configuration files for project initialization. The core read configuration file is tailwind.config.js, which is the file that needs to configure and manage our references when we use tailwindcss again.

Reading the configuration file is mainly to initialize and replace the AST data structure. This file is called as a parameter in subsequent logical processing.

processTailwindFeatures.js under the src file is the entry file for all operation business logic. In addition, due to different references of PostCss versions, the core entry is this file. A series of logic operation codes are as follows:

The following processTailwindFeatures.js in the src file contains such a line of code:

The core function is to traverse some column configuration files under src/plugins:

The generated code after traversing these configurations is the code in util - > processplugins.js:

Loop some columns and perform traversal logic operations according to the elements required for configuration, so as to generate base, components and utilities files. Generate raw data for data logical operations.

The core operation code of base is as follows:

(2) We need to generate the style file according to the configuration file. For example, the value after z-index is configured. The code is as follows:

The components template, as I understand it, provides a series of code logic similar to componentization. At present, TaiWindCss only does this for the layout style container. The main codes are as follows:

From the perspective of code logic, read the value of configured screens and traverse the style data of container s under different screens. Then classify and output the style library components. Of course, we can also extend this, such as:

If such a plug-in configuration is added, these blocks are packaged into the components library.

A series of parameters passed are some core code applications in util - > processplugins.js.
Main core codes:
Read the plug-in configuration from the entry file SRC - > index.js:

The getConfigFunction method reads the plug-ins in the tailwind.config.js configuration, performs data initialization, and then writes these plug-ins in. In principle, the method of JS writing is similar to which plug-in JS files in the plugins folder. It's just called in different ways.

For specific plug-ins, use the document to view the official website TaiWindCss plug-in usage documentation

In the process of using TaiWindCss again, we need to provide an npm package. Therefore, TaiWindCss also integrates a user manual (scaffold) of TaiWindCss.
View package.json:

According to the directory, we know that it mainly provides three init (initialization), build (build to generate CSS) and help (help document)

The specific code is very simple, that is, simple scaffold configuration js, which is not written here. If you are interested, you can see the source code.

Through the analysis of TaiWindCss source code and reading the source code during this period, I learned some good writing methods of code and the design idea and concept of system architecture. The main learning achievements are as follows:

Through reading and viewing relevant codes during this period, I am really familiar with and can skillfully use the tool library of postCss. I think a very important harvest is the system design of codes.

In the past, our code design may be positive. From if else to else, we call when we call and pass parameters when we pass parameters. The design concept is top-down.

After reading the source code of TaiWindCss, I think it is very useful to traverse a series of files under plugins, transfer function methods in function parameters, where to obtain data, and finally get the original data. Such design is the core design concept of this architecture.

Such reverse operation logic, code classification is great, and data collection is done through a loop. Function calls pass parameters, and each different plug-in set is used on demand.

Later, I will provide a development practice of mini TaiWindCss.