Spark SQL: API for structured data operation based on spark

Spark SQL is one of the most complex components in spark technology. It provides the function of operating structured data in Spark Program, that is, SQL query. Specifically, spark SQL has the following three important features:

1.Spark SQL supports reading of multiple structured data formats, such as JSON,Parquet or Hive tables.
2.Spark SQL supports reading data from a variety of external data sources. In addition to local data, HDFS and S3, it can also connect to external relational database systems through standard database connectors such as JDBC.
3. The last point is to be able to freely perform SQL operations in Spark programs and achieve a high degree of integration with various programming languages Python/Java/Scala.

In order to realize these important functions, Spark SQL introduces a special RDD called DataFrame, which is also called schemardd (before spark 1.3.0).
Let's take a look at DataFrame first.

DataFrame is a distributed data set based on RDD. Theoretically, it is very close to a data table in relational database or the data abstract Data Frame in Python pandas.

However, compared with the DataFrame in Python or R, the DataFrame in Spark SQL is more optimized internally during execution. First, like ordinary RDD, the DataFrame also abides by the inert mechanism, that is, the real calculation is only when action (such as displaying results or saving output) is triggered. It is precisely because of this mechanism that Spark SQL DataFrame based operations can be optimized automatically.

The core optimizer behind Spark SQL is called Catalyst Optimizer. Let me introduce Catalyst workflow in detail based on the following figure. 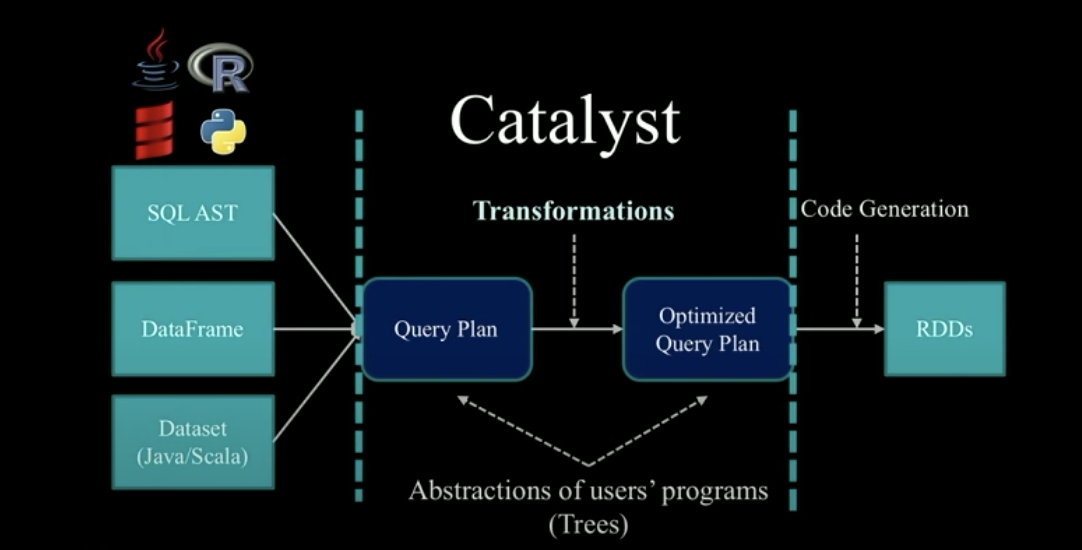 First, the selected DataFrame/Dataset and the corresponding SQL statement will be received by Catalyst as input and generate an unprocessed Query Plan. Each Plan uses a tree as an abstract set of user programs, and its nodes are used to describe a series of operation processes from the input dataset to the output query results. Each node corresponds to a step. The following is a simple example example. 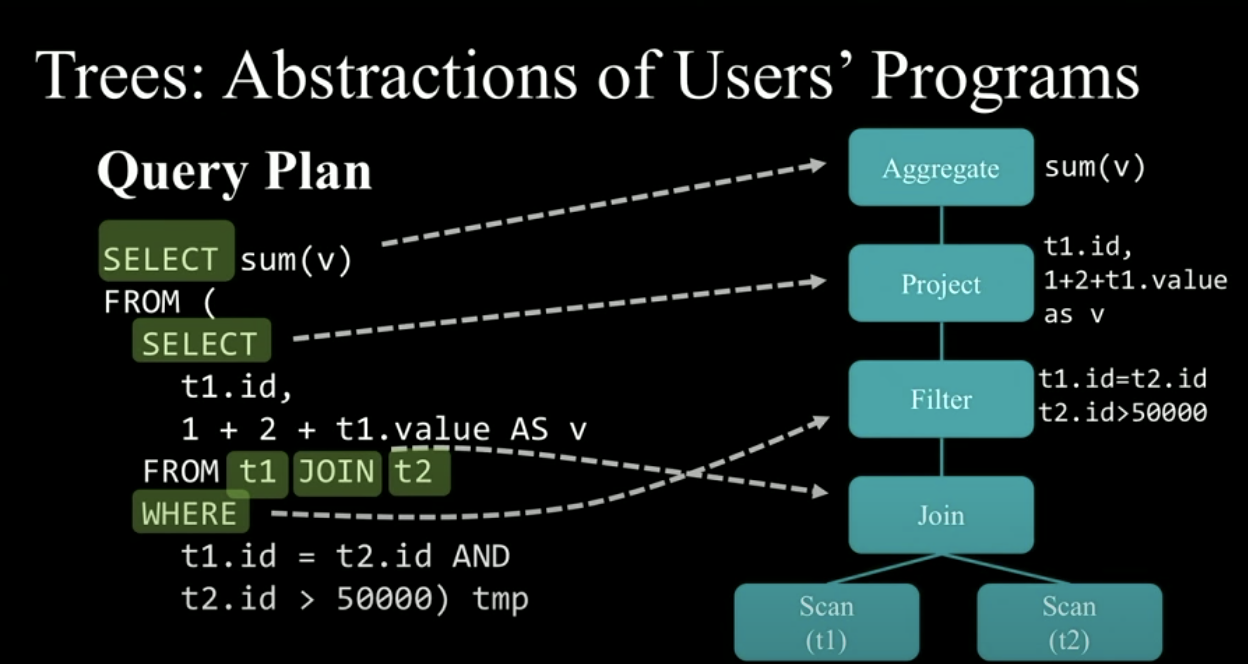 Then, through a series of transformations between trees, the Optimized Query Plan is obtained from the initial Query Plan to generate RDD DAG for subsequent execution. The internal structure of the transformation operation is as follows. 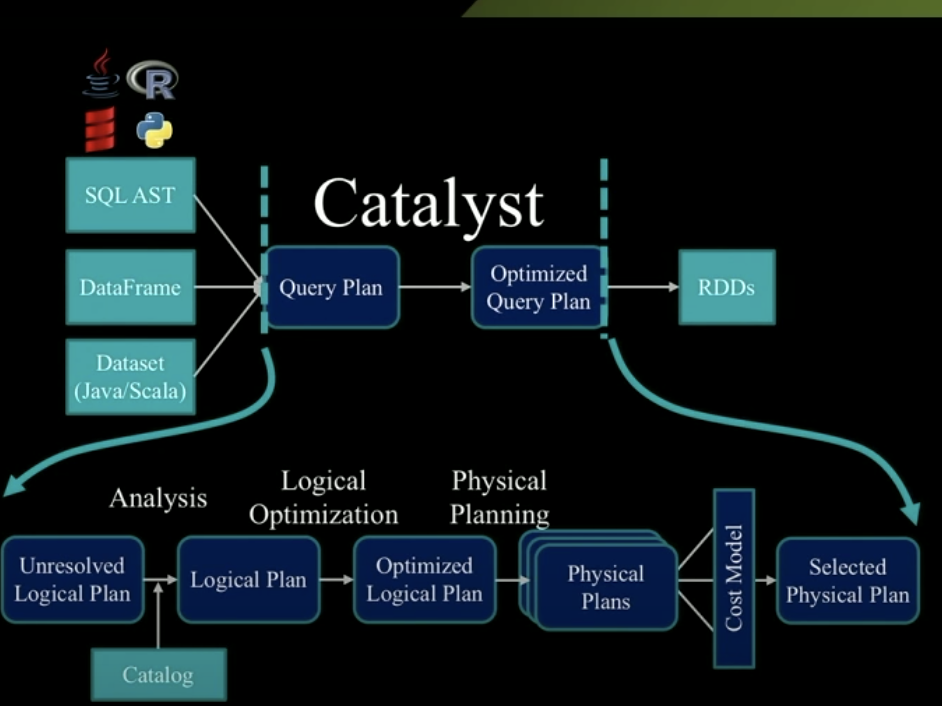 The above conversion process involves a very typical optimization step, called Predicate Pushdown. That is, press the filter predicate to the specified data source, the t2 table in the figure above. First filter the t2 table, and then join the filtered results. This avoids unnecessary data joins and effectively increases the efficiency of joins.

The above is a brief introduction to Catalyst Optimizer. Another point worth mentioning is that for Python users, that is, PySpark, another advantage of Catalyst Optimizer is that it can significantly improve the use efficiency of PySpark. In other words, compared with using RDD in PySpark, the query efficiency of using DataFrame will be greatly improved. The reason is very simple, because For Catalyst Optimizer, no matter what language the initial code is written in, the final optimizer will uniformly generate JVM binary code for execution. Therefore, when using DataFrame, the execution speed is not affected by the programming language. However, if it is RDD, the execution speed of Python will be much slower than that of Java or Scala, which also performs RDD operations. The main reason is It is the overhead of Python and JVM in the process of communication. We can take a look at the following figure to intuitively feel it.

Having finished the important optimizer behind Spark SQL, we now officially enter the introduction to the use of DataFrame. Here we take PySpark as an example.

First, we need to create a SparkSession. Before Spark 2,0, we will use SQLContext. Meanwhile, Spark has many other contexts, such as HiveContext, StreamingContext, and SparkContext, which are now unified into SparkSession.

We have a JSON file std_info.json that briefly describes student information. We use SparkSession to read it in.

In addition to using the. show() method to view the data contained in the DataFrame, we can also use. collect() and. Take (n). N represents the number of rows we want to get, and the returned row object will be stored in the list and returned.

Next, we use the DataFrame API to query the data.

1. We can use the. count() method to check the number of rows in the DataFrame.

2. We can combine. select() and. filter() for conditional filtering.

1. Query the number of rows.

3. Query students whose eye color begins with the letter b

How to convert RDD to DataFrame

RDD - > dataframe is a data structured process. We need to customize the schema. Let's look at the following example.

OK, so far, the basic theoretical background and basic DataFrame operation of Spark SQL have been introduced. I hope it will be helpful to you!