1. The cause of circular dependency - injected through the constructor

Now we can write a Configuration class for the test, let's call it TestConfig, which specifies the underlying package to scan for the component. Suppose our bean is defined in the package "com.baeldung.circulardependency":

Finally, we can write a JUnit test to check the loop dependency. The test can be empty because cyclic dependencies are detected during context loading.

If you try to run this test, the following exception occurs:

An easy way to break the loop is to have Spring lazily initialize one of the beans. That is: instead of fully initializing the bean, it creates a proxy to inject it into another bean. The injected bean is only fully created when it is first needed.

To try this operation with our code, you can change the CircularDependencyA to the following

If you run the test now, you will see that this error will not occur.

One of the most popular solutions, also proposed by Spring documentation, is to use setter injection.

Simply put, if you change the way your beans are connected, use setter injection (or live injection) instead of constructor injection - which does solve the problem. Spring then creates beans, but does not inject dependencies until it needs to.

Let's do this - let's change our class to use setter injection and add another field (message) to CircularDependencyB so we can do the appropriate unit tests:

Timing of cycle dependence
Bean instantiation mainly consists of three steps, as shown in the figure: 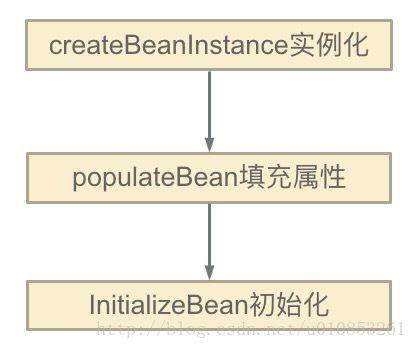 The problem is in the process of the first and second steps, which is to populate the properties / methods

The process of detecting circular dependency is as follows:

The above corresponds to the setter construction injection in the xml configuration file, and scope = "singleton", while scope = "prototype", the Spring container does not cache, so it is unable to expose a Bean created in advance.