II Storage of integers in memory 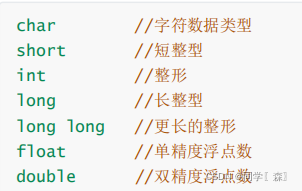 It is usually used for the return type, parameter and pointer type of a function

II Storage of integers in memory

1. The original code, inverse code and complement of positive integer are the same

Data is stored in memory as a complement

Original code: directly translate the numerical value into binary in the form of positive and negative numbers.
Inverse code: the sign bit of the original code remains unchanged, and other bits are obtained by inverting the bit in turn
Complement: inverse code + 1 will get complement

There are two representations of floating point numbers: 2.96, 2e3

Floating point storage rule
According to the international standard IEEE 754, any binary floating-point number V can be expressed in the following form:
(-1)^S * M * 2^E
(- 1)^s represents the sign bit. When s=0, V is a positive number; When s=1, V is negative.
M is a significant number, greater than or equal to 1 and less than 2. 2^E represents the exponential bit.

Convert the decimal system into binary system, and the first digit after the decimal point is 2 ^ - 1,2 ^ - 2

IEEE 754 stipulates:
For 32-bit floating-point numbers, the highest bit is sign bit s, the next 8 bits are exponent E, and the remaining 23 bits are significant digits M.

For 64 bit floating-point numbers, the highest bit is sign bit S, the next 11 bits are exponent E, and the remaining 52 bits are significant digits M. 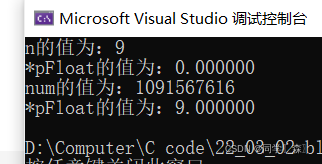 Casts an integer to a single precision floating-point type.

We know that%f stores 6 decimal places after the decimal point by default. Just one M is rounded to zero, not to mention multiplying by another

Storage is stored in the form of floating point numbers.

In case of integer printing, the computer regards it as complement.

Positive number, original, inverse and complement are the same

And the above numbers are converted to decimal