What happens when the "+" operation is performed on variables and constants of type String?

For a string whose value can be determined at compile time, that is, a constant string, the jvm will store it in the string constant pool.

During compilation, the Javac compiler (hereinafter referred to as the compiler) performs a code optimization called constant folding.

Constant folding will calculate the value of constant expression as a constant and embed it in the final generated code. This is one of the few optimization measures that the Javac compiler will take on the source code (almost all code optimization is carried out in the real-time compiler).

Not all constants will be folded. Only constants whose values can be determined by the compiler during program compilation can be folded:

If the referenced value cannot be determined at the compilation time of the program, the compiler cannot optimize it.

Therefore, str1, str2, and str3 are all objects in the string constant pool.

Object reference and "+" string concatenation are implemented by StringBuilder calling append(). After the completion of the mosaic, toString() is called to get a String object.

Therefore, str4 is not an object existing in the string constant pool, but a new object on the heap. 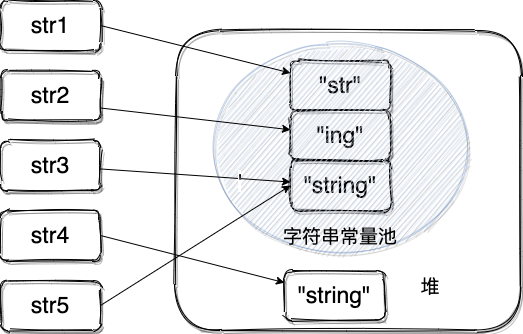 However, after the string is declared with the final keyword, it can be treated by the compiler as a constant.

The String modified by the final keyword will be treated as a constant by the compiler. The compiler can determine its value at the compilation time of the program. Its effect is to access constants.

You can verify by viewing the bytecode file: 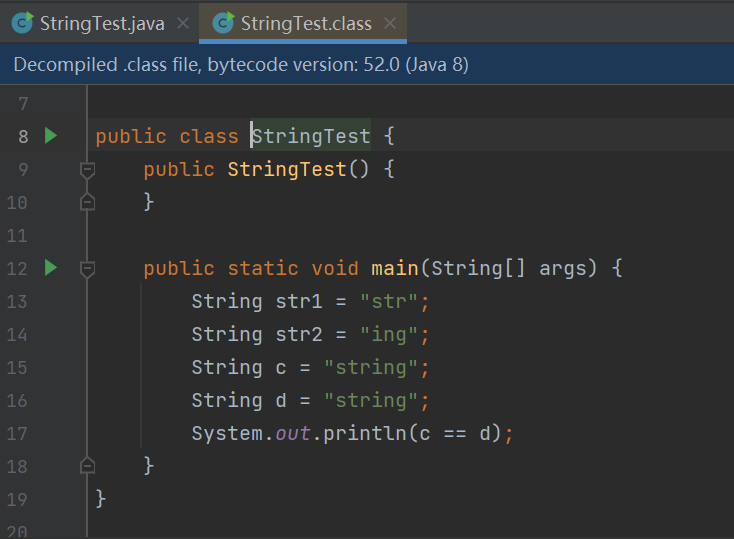 However, if the compiler can only know its exact value at run time, it cannot optimize it, that is, as long as one of them is a variable, the result is in the heap.

After the code runs, the output is false because:

1. new StringBuilder (because the connection operation occurs and the connected variables are variables)

6. "ab" in the heap (created in the heap by the toString() method, but not in the string constant pool)

After JDK1.6 and JDK1.7, the intern function has different processing:

Using the intern method, when there is no string constant in the constant pool:

What is the packing type? What is the difference between basic type and packaging type?

Java has introduced the corresponding wrapper class for each basic data type. The wrapper class of int is Integer. Since Java 5, the automatic boxing / unpacking mechanism has been introduced. The process of converting a basic type into a wrapper type is called boxing; Conversely, the process of converting a package type to a basic type is called unboxing, so that the two can be converted to each other.

The main differences between basic type and packaging type are as follows:

1. The wrapper type can be null, while the base type cannot. It allows wrapper types to be applied to POJOs, while base types do not. So why do POJO attributes have to use wrapper types? The Alibaba Java development manual explains in detail that the query result of the database may be null. If the basic type is used, the exception of NullPointerException will be thrown because it is necessary to unpack automatically (convert the packaging type to the basic type, for example, convert the Integer object to the int value).


What is automatic packing and unpacking

9 is a basic data type. In principle, it cannot be directly assigned to an object Integer. By introducing the automatic boxing / unpacking mechanism, you can make such a declaration, automatically convert the basic data type into the corresponding encapsulation type, and call all the methods declared by the object after it becomes an object.

Because objects cannot be calculated directly, but they can only be added, subtracted, multiplied and divided after being converted to basic data types.

Why is i4 == i5 + i6 true? Because i5 and i6 will be unpacked automatically and the values will be added, that is, i4 == 40. The Integer object cannot be directly compared with the value, so i4 automatically unpack it to the int value of 40. Finally, this statement is converted to 40 = = 40 for numerical comparison.

Byte, short, integer and long create cache data of corresponding types of values [- 128, 127] by default, Character creates cache data of values in the range of [0, 127], and Boolean directly returns True or False.

The equals method of Integer has been rewritten to compare the value of internal value;

When judging whether the Integer value is the same, it is recommended to use the equals method or automatic unpacking

Because 128 exceeds the cache, x and y actually create Integer objects with a value of 128, and the addresses must be different

First, replace one of the two variables for operation comparison with int type. When = = is compared, x will be automatically unpacked and converted to int