Ten arithmetic questions are required for an interview. How many will you do?

Recently, a lot of small partners have communicated with me about brushing problems. My advice is to offer and buckle hot100 first. There are still some very important and frequent occurrences in these problems. Today, I share the 10 most frequently occurring arithmetic problems with you, and learn to make money.

Flipping a list means not creating a new list node and then flipping it on the original list, but this graph can be a bit misleading. In fact, you can see the following picture for a better understanding:

Specifically, there are two ways to achieve the above two ideas, non-recursive and recursive, non-recursive is relatively simple. Using a prenode to record the precursor node, when enumerating down, you can change the pointer pointing, and the implementation code is:

Recursion is a clever way to change pointer-to-pointer and return-to-value transfer by using the process of recursion. The code is concise but difficult to understand. Here is a diagram to help you understand: 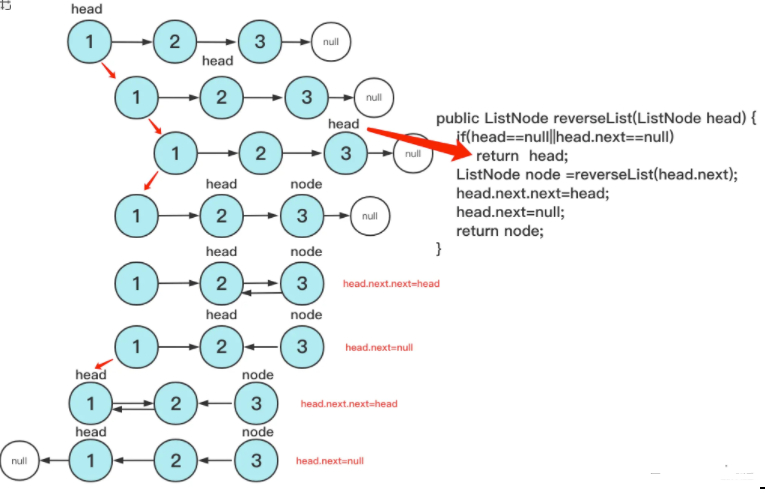 For the 146LRU Cache mechanism with the title:

Design and implement an LRU cache mechanism using the data structure you have. Implement the LRUCache class:

LRUCache(int capacity) initializes LRU cache int get(int key) with positive integer capacity capacity. If the key exists in the cache, it returns the value of the key, otherwise it returns -1. void put(int key, int value) If a keyword already exists, change its data value; If the keyword does not exist, insert the group Keyword-Value. When the cache capacity reaches its maximum, it should delete the oldest unused data value before writing new data to make room for new data values.

Detailed Analysis: An Experience in LRU

The code for implementation is:

Given a list of chains, determine if there are rings in the list, and use O(1) memory to solve.

Detailed analysis: It's great to find the entrance to the ring list

This problem is more efficient using fast and slow double pointer, fast pointer fast takes 2 steps at a time, slow takes 1 step at a time, slow pointer takes 2 N steps at the end of n step, and the size of the ring must be less than or equal to n so it must meet. If it meets, it means there are rings. If it does not meet, fast first indicates no rings for null.

Force buckle 142 is extended by force buckle 141. If there is a ring, return to the node that enters the ring, think of node 2 in the ring chain table in the following figure.

This problem requires a mathematical conversion. The detailed analysis can be seen above. Here are the steps for the main topic.

If the first junction is found, one stops and the other continues, and the next junction happens to take a circle, the length of the loop can be calculated as y. 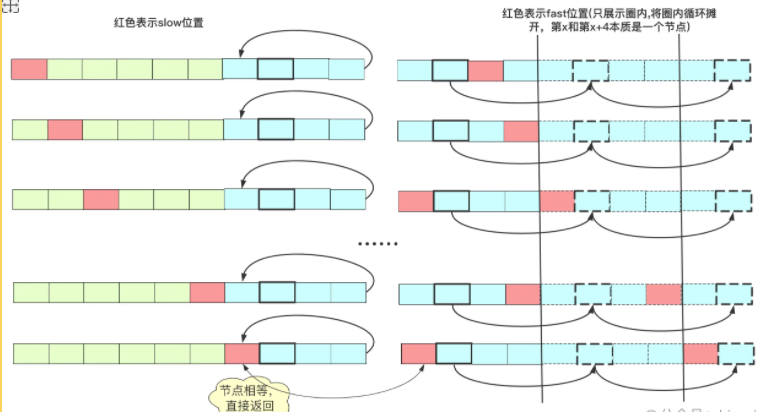 To solve this problem, you need to know what the stack is, what the queue is, and what the two common data structure formats are simple. The stack features are: LIFO, the queue features are: FIFO, the stack can be imagined as a stack of books, the sooner the stack is fetched, the above comes out (for example); Queues are imagined to be queued for shopping, only going in and out from behind, so there are differences in data structure between the two. Although they are all single entries in and out, stack imports and exports are the same, but queues are different.

The data structure described above is a common stack and queue, in which we use two stacks to implement a queue operation. One of the easier scenarios to think about here is that stack1 is used as a data store, stack1 is inserted directly at the end of the insertion, and data is added to another stack2 first when the header is deleted, and the top elements of the stack are returned and deleted. Adding stack2 order to stack 1 implements a recovery, but insertion time complexity is O(1) and deletion time complexity is O(n).

We will also show you how to achieve this:

This kind of time complexity is not like, because deleting is too time consuming and has to be tossed around every time. Is there any good way to make deletion easier?

Yes, stack1 guarantees sequential insertion, and stack1 data can be deleted in stack2. So stack1 is used for insertion and stack2 is used for deletion, because the title does not require data to be placed in a container, so it's a perfect combination!

When implementing this, insert directly into stack1, if deletion is required from the top of stack2, if stack2 is empty then add all the data in stack1 (which in turn ensures that all data in stack2 can be deleted sequentially). Here are a few examples of deletion

In fact, the data is divided into two parts, one for insertion and one for deletion. The stack2 deleted is empty and the data added in all stack1 is continued to operate. The time complexity of inserting and deleting this operation is O(1), which is implemented in code:

Detailed analysis: An interview was blown up by binary tree hierarchy traversal

Ordinary binary tree hierarchy traversal is not a difficult problem, but it has a hierarchical operation to return results that you need to consider in detail.

Many people use two containers (queues) for hierarchical operations, where you can actually use a single queue directly. First, we record the queue size len before enumeration, and then enumerate the len to get the complete data for that layer.

Another difficulty is the jagged sequence of binary trees (also known as zigzag printing), the first from left to right and the second from right to left, simply recording the corresponding operations of an even and odd number of layers. 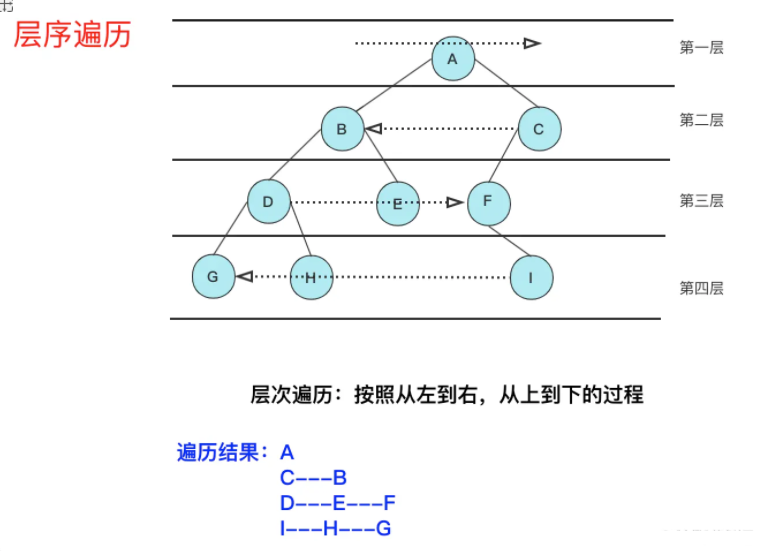 Here we share the code with you by using the jagged sequential traversal of 103 binary trees as a test board:

For the middle traversal of a binary tree, it is normal to throw out the output when the node is visited for the second time (the first prefix), so that we enumerate that each node cannot be deleted for the first time, we need to store it in the stack first, and throw out the access to the node when the left child node is processed. 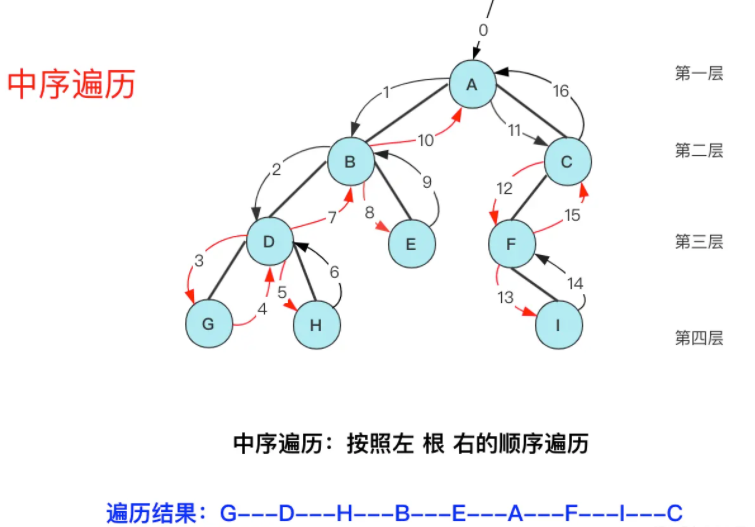 The core is a two-step process, with both left and right leaf nodes null, which also meets the following conditions:

Then traversal follows a recursive thinking, in fact, the third visit to the node is usually to throw the output from the right child node, which is really difficult to achieve. However, for the specific implementation, we use a prenode to record the last point that was thrown. If the right child being thrown is preor the right node is null, throw this point out. Otherwise, the right side of the prenode has not been visited and needs to be "rebuilt" for later use! If you don't understand this, you can see the details above.

The code for implementation is:

Of course, post-order traversal can also be useful if the results of the pre-order traversal of the preceding order (right-left root) are flipped one last time, but the interviewer prefers to look at the method mentioned above.

Climbing stairs and jumping steps is a classical problem. It corresponds to offer10 of swordfinger and 70 questions of forceful buckle. The Title is:

Suppose you are climbing the stairs. You need n steps to reach the roof. You can climb one or two steps at a time. How many different ways do you have to climb to the top?** Note: ** Given n n n is a positive integer.

This question starts at level dp and analyses the results of the current k-th order. Each person can climb one or two steps, so it may be from k-1 or k-2, so it is the overlap of two sub-situations (special consideration is needed for the initial situation). Recursion is thought of by some people. Yes, recursion does work, but it's less efficient (since this is a divergent recursion that splits into two), and it's slightly better to use a memory search.

However, DP is a better method. The core state transfer equation is: dp[i]=dp[i-1]+dp[i-2]. Some spatial optimizations are better because only the first two values are used, so you can use three values repeatedly to save space.

Of course, some of the data is very redundant step, can be solved by the matrix power quickly, but this is not introduced here, interested can have a detailed look.

The TOPK question is really classical. It usually asks the smallest number of K. Looking for K is mostly TOPK. Here, 215 is buckled to look for the K big element of the array as the board.

TOPK has a lot of ideas for problem solving. If the optimized bubble or simple selection sort, the time complexity is O(nk), and the optimized heap is O(n+klogn), but with the fast queue distortion, you can handle all the problems in general (it's a bit difficult for the interviewer to sort your handwritten heaps).

Many people reject this pivot as the first random choice (to fight tough test cases) in order to get faster than the test sample, but here I choose the first pivot for code reference:

The Title is: Given a string, find out the length of the longest substring that does not contain duplicate characters.

This question is to give a string to let you find the longest non-repeating substring. To clarify the differences between substrings and substrings:

Substring: Continuous, can be seen as part of the original string intercept. Subsequence: Not necessarily continuous, but keep the relative positions between elements constant.

So what do we do?

Violence search, violence search is certainly possible, but it is too complex to explain here. The idea selected here is a sliding window, a sliding window, that is, to use an interval from left to right, right to test first to find the maximum value of no repetition in the interval, and when there is repetition, move left to right until no repetition, then repeat until the end. Find the largest substring in the whole process. 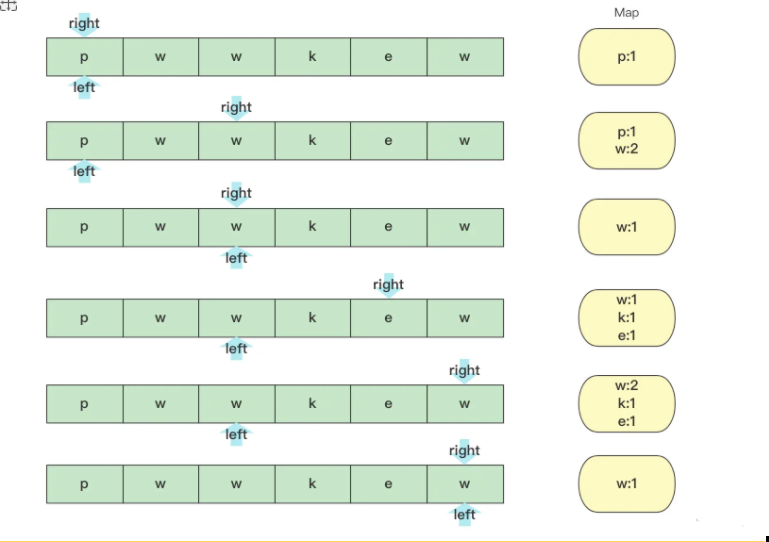 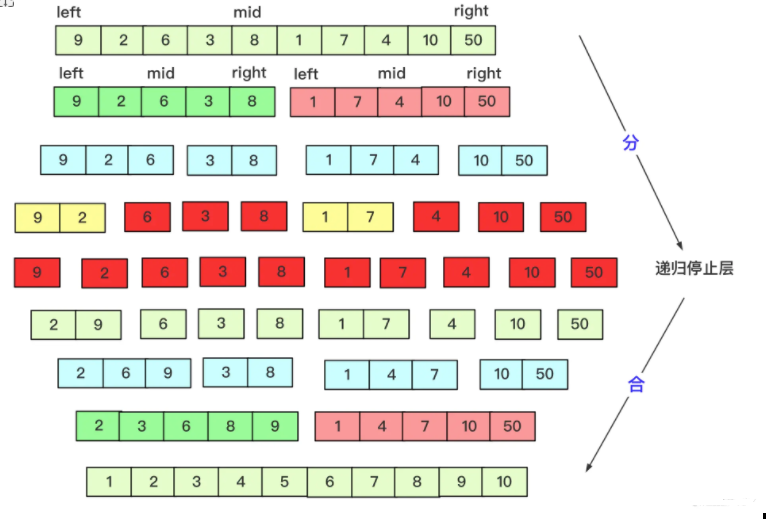 It is much faster to use arrays instead of hash tables for implementation:

No one really thinks they're using Arrays.sort() is over. Handwritten sorting is still very frequent. Compared with simple people like bubble and insert, there are not many investigations such as heap sorting, Hill sorting, cardinality sorting, etc. Fast sorting is the most frequent one. There is an extra reward for merge sorting which is also very high frequency. Both are typical divide and conquer algorithms. Fast sorting can also be compared with the previous TOPK problem.

Top 10 sorting details have been described in detail, you can refer to: programmers will know the top 10 sorting 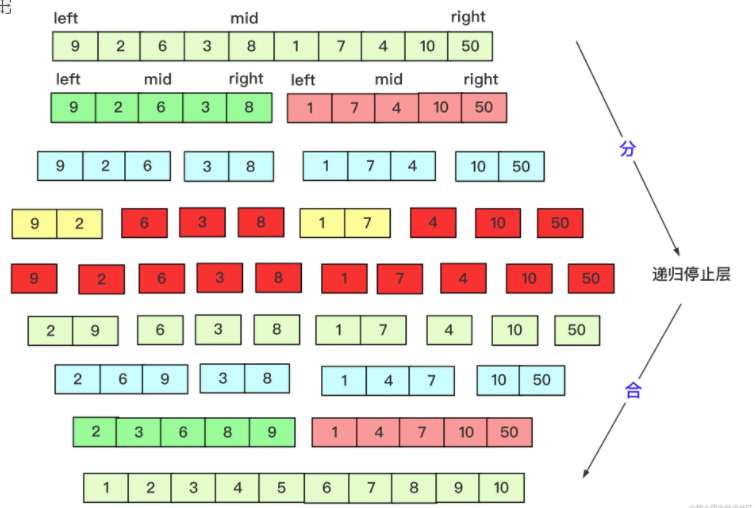 Okay, the 10 questions I'm sharing with you today are really very, very high frequency in interviews. I dare you have to meet one of them (no exaggeration) on average every two interviews!

Although the topic sea is very deep and incomplete, everyone who has learnt caching knows to cache hot spot data and those who have tried it knows to master the necessary points... These ten questions have been put to the mouth.