The latest version of QT6 2.2 compilation

Compiling the source code of large-scale projects, if you haven't done it, you must find it somewhat difficult, but once you practice it, you will have a general idea in your mind. So don't have resistance and practice.

For example, I have problems during compilation:

It took me a long time to check the above error. The conclusion is that gcc version 8.3 does not support this writing method. Just upgrade the gcc version.

So how do I upgrade gcc for windows? I went to google and didn't find a solution.

Later, there was no way. I manually modified the source code. I forgot how to modify it now. In short, the compilation has passed, and I am still complacent about it.

Later, I made a mistake and was really helpless

All kinds of link errors, which I really have a big head.

I began to reflect... It may not be the code, but my problem. I re executed configure Bat, see a very important message. I actually saw that make specified gcc as the compiler.

I wonder why I still use gcc instead of initializing the environment of vs2019 compiler. It's really a day's dog. Only here did I realize that there was something wrong with my environment, but it has been two days since I just started compiling Qt source code.

I started to check the environmental problems, and finally found that the problem was with me. When I specified the perl directory, I specified an additional bin directory, which contains GCC exe.

So: the compilation environment is very important

Note: don't compile QDoc first, because according to the official documents, the Clang compiler is used to compile QDoc.

The above tools need to be downloaded from foreign websites. In order to facilitate everyone, I downloaded them directly and put them on Baidu online disk.

Qt source address, we can directly Tsinghua source on it.

Let me explain the compilation parameters used above: the default is dynamic compilation

After initializing the above environment, you can execute \configure --help, you can find more option information. I suggest you read it again.

When executing the bat file on the command line, you must carefully observe the output information. This is one of the paragraphs: it contains the version of the compiler. I was here before.

Look at the last tip

I feel there should be no problem compiling here.

3. Problems encountered in the process

The environment configuration encountered in the compilation process is a major difficulty. I made a key introduction at the beginning, hoping to attract everyone's attention.

I'll talk about other problems, which has bothered me for a long time.

You can see that when I set environment variables above, they are set separately, right. If you set it together, you will report an error: the input line is too long and the command syntax is incorrect.

The key is that if you put it into a bat file for execution, it does not have this error message.

I also found it by accident, because many cmd command line windows are opened, sometimes it is faster to copy the code directly. Just found this mistake.

3.2 why can't it be compiled into MT format?

Qt is compiled by MDd (debug version) and MD (release version) by default. After I compile, I will immediately test it in combination with libcef.

It was found that libcef was compiled using MTd and MT methods.

Once compiled, the following link problems are found:

I thought to myself that libcef I use the official compiled binary file, and I can't modify it anymore. So I had to go back and compile Qt in MT and MTd.

Then, I analyzed for a long time where cmake specified MDd and MD compilation options. Finally I found build The specified compilation options are found in ninja. I manually modify MDd to MTd and MD to MT. I also spent some time analyzing the build How did Ninja come into being? Ah... I didn't find out, so I gave up. Because I want to modify it directly from the source, not the generated file.

After 2 hours of compilation, it went well, but the problem came. When calling the exe of that translation, it will directly report:

I checked the information and asked the same question on the Qt forum. Why not compile Qt in MT mode. One answer is: MD mode is more convenient for memory management.

I think it can be summarized in one sentence: their memory management methods are different. MT must be applied by that module, and it must be released by that module. MD is unified management. In MT mode, an error will be reported if there is a mistake (this module applies for memory and other modules release memory). MD is a set of management memory, and there is no problem of cross module application and release memory.

In that sentence, the environment is very important.

The performance of my desktop machine is not bad. I only compiled the debug version, which took about 3 hours. I suggest that you compile debug first and then release in your spare time.

Finally, prepare a larger hard disk. When I compiled here, I spent a total of 78.2G, including all kinds of garbage files that failed to compile.

I ran a demo project by the way, no problem. 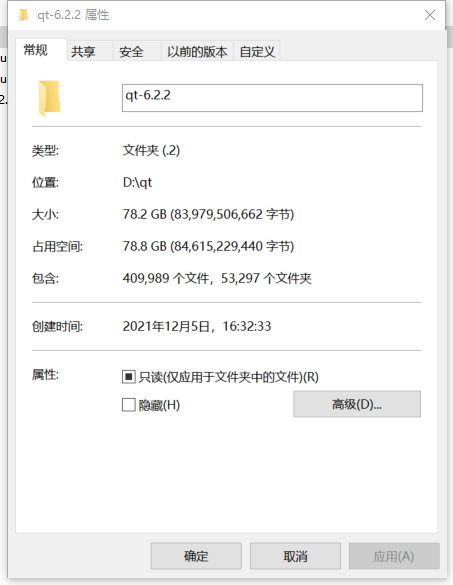