Logistic regression is a very common means of classification. It belongs to probabilistic nonlinear regression, which is divided into two classification and multi classification regression models. For binary logistic regression, the dependent variable y has only two values of "yes" and "no", which are recorded as 1 and 0. Suppose that under the action of independent variables x1,x2,..., xp, the probability of y taking "yes" is p, and the probability of taking "no" is 1-p. The following will introduce the principle and application of the most commonly used binary logistic regression model. (those who don't want to see the principle can be directly adjusted to the second half, with code demonstration)

In the binary classification problem of logistic regression, the function to be used is sigmoid function. Sigmoid function is very simple. Its expression is 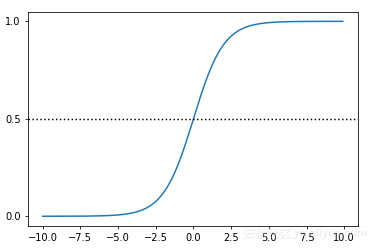 Determination of optimal regression coefficient based on optimization method

From the above, we can see that the general process of logistic regression is as follows. What we need to do is to determine the best w = (W0, W1, W2,..., WN).

In logistic regression, the maximum likelihood method is used to solve the model parameters. For the concept of likelihood function, please refer to Kevin Gao's blog

First define the likelihood function (each sample is considered to be independent):

It can be seen that when the weight vector w maximizes l(w), W is the most reasonable.

The basic idea of gradient rising method is: to find the maximum value of a function, the best way is to search along the gradient direction of the function. If the function is f, the gradient is recorded as D, and a is the step size, the iterative formula of the gradient rise method is: w: w+a*Dwf(w). The condition for stopping the formula is that the number of iterations reaches a specified value or the algorithm reaches an allowable error range. First, calculate the gradient of logarithmic function:

Directly expressed as a gradient by matrix multiplication:

Set the step size to α, Then the new weight parameters obtained by iteration are:

Data set: the gre, gpa and rank information of students are used as variables to predict whether to admit. If admit=1, admit=0 means not to admit.

To build a data frame that requires logistic regression:

Perform logistic regression according to the above data frame:

According to the fitted model, it can be predicted:

At the same time, the random gradient rise method can be improved as follows:

epilogue
From the above, you must have a certain understanding of logistic regression. If you don't want to define the function adjustment parameters yourself, you can also call the existing package for logistic regression classification, such as LogisticRegression in sklearn library and Logit in statsmodels library.