What is a transaction?

Usually, a transaction corresponds to a complete business (for example, bank account transfer business, which is the smallest work unit)
A complete business requires batch DML(insert, update, delete) statements to be jointly completed

MySQL can be roughly divided into the following three types of locks:

Writing to the M yISAM table will block other users' read and write requests to the same table;

InnoDB row locks are implemented through index entries on the index.

For ordinary SELECT statements, InnoDB does not apply any locks.

When we retrieve data with range conditions instead of equal conditions and request shared or exclusive locks, InnoDB will lock the index entries of existing data that meet the conditions;

For records whose key value is within the condition range but does not exist, it is called "gap". InnoDB will also lock this "gap". This locking mechanism is the so-called gap lock.

For example, all existing or nonexistent data in between and will be locked. Can prevent unreal reading.

Maintain an initial snapshot of data for each transaction

(if other transactions are committed or rolled back, it will read it immediately)

Spring transactions can be divided into two types:

Those methods that cannot be enhanced by Spring AOP do not work in a transactional environment. As long as they are called by the outer transaction method, due to the propagation level of Spring transaction management, the internal method can also work in the transaction context started by the external method.

Spring transactions can be divided into two types: 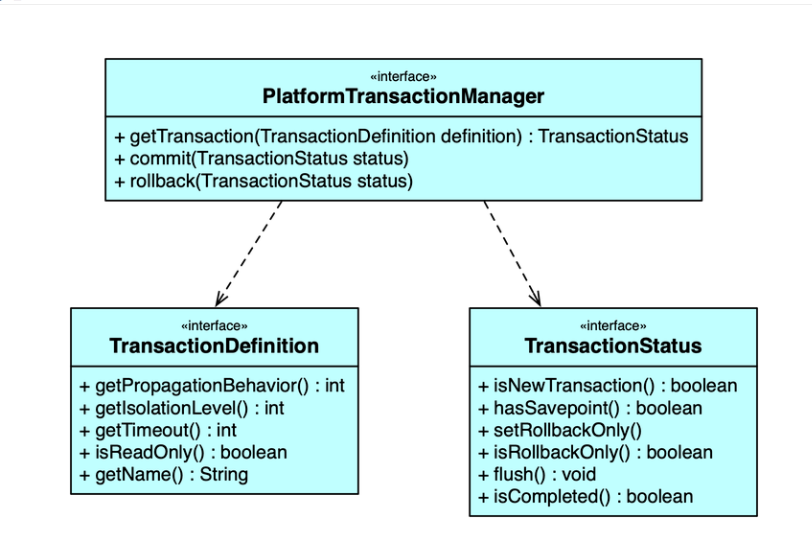 The interface PlatformTransactionManager defines the behavior of transaction operations, which depends on the TransactionDefinition and TransactionStatus interfaces

(a set of behaviors are defined, and the specific implementation is completed by different persistence Frameworks - similar to JDBC)

Perform commit or rollback operations according to the given transaction rules

The parameter in this method is the TransactionDefinition class, which defines some basic transaction attributes.

Five constants representing the isolation level are defined in the TransactionDefinition interface:

The current transaction is not supported:

In the TransactionDefinition, the timeout time is represented by the value of int, and its unit is seconds.

(whether to perform read-only operation on transaction resources)

If we decide to only perform read-only operations on transactional resources, we can mark transactions as read-only to improve the performance of transaction processing.

In the TransactionDefinition, boolean type is used to indicate whether the transaction is read-only.

These rules define which exceptions will cause the transaction to roll back and which will not.

However, you can declare that when a transaction encounters a specific check exception, it will roll back as if it encountered a run-time exception.

Similarly, you can also declare that the transaction will not roll back when it encounters specific exceptions, even if these exceptions are run-time exceptions.

Represents the specific running state of the transaction

(obtain the information of transaction running status, or indirectly roll back transactions and other operations through this interface)

The TransactionStatus interface is used to record the status of transactions. It defines a set of methods to obtain or judge the corresponding status information of transactions

The returned TransactionStatus object may represent a new or existing transaction (if there is a qualified transaction on the current call stack).

The contents of the TransactionStatus interface are as follows:

By default, Spring uses JDK dynamic proxy for interface implementation and CGLIB for specific classes. At the same time, it also supports global configuration and CGLIB to generate proxy objects.

Surround enhancement (org.aopalliance.intercept.MethodInterceptor): enhancement is performed before and after the target method is executed;

Calling other methods inside the current transaction containing method (whether the method contains transactions or not) belongs to the knowledge point category of Spring transaction propagation mechanism.

Create a new transaction. If there is a current transaction, suspend it.

Always execute in a non transactional manner. If a transaction currently exists, suspend the current transaction

If the current transaction exists, it is executed in the nested transaction. Otherwise, the REQUIRED operation is the same (start a transaction)

There are two points to note:

REQUIRES_NEW is to create a new transaction, and the newly opened transaction has nothing to do with the original transaction

In the NESTED case, when the parent transaction rolls back, the child transaction will also roll back,

And in requirements_ In the case of new, the original transaction is rolled back and the newly opened transaction will not be affected.

In a typical application, multiple transactions run concurrently and often operate the same data to complete their respective tasks (multiple users operate on unified data). Although concurrency is necessary, it may lead to the following problems.

Dynamic proxy is the default way for Spring to implement AOP

By default, Spring uses JDK dynamic proxy for interface implementation and CGLIB for specific classes. At the same time, it also supports global configuration and CGLIB to generate proxy objects.

We have learned about the process of generating proxy objects by weaving AOP aspects. When Bean methods are called through proxy objects, the corresponding AOP enhanced interceptors will be triggered,

MVCC is a method of concurrency control. Generally, it realizes the concurrent access to the database in the database management system.

In the InnoDB engine of Mysql, it refers to

For the SELECT operation, the process of accessing records in the version chain.

This allows other transactions to modify this record. Anyway, each modification will be recorded in the version chain.

SELECT can get records from the version chain, which realizes the concurrent execution of read-write and write read, and improves the performance of the system.

In the InnoDB engine table, there are two necessary hidden columns in its cluster index record:

This id is used to store the transaction id every time a cluster index record is modified.

Rollback pointer to the Undo Log information of this record.

Every time a cluster index record is modified, the old version will be written to the undo log. This roll_ A pointer is stored in the pointer, which points to the location of the previous version of the clustered index record and obtains the record information of the previous version through it. (note that the undo log of the insert operation does not have this attribute because it does not have the old version)

The difference between committed reads and repeatable reads is that they have different strategies for generating readviews.

ReadView mainly has a list to store the currently active read-write transactions in our system, that is, begin the uncommitted transactions

Suppose the transaction id in the current list is [80100].

If the transaction id of the record version you want to access is 90 and it is found that the transaction is between the maximum and minimum values of the list id, then judge whether it is in the list,

If it is, it means that the transaction has not been committed, so the version cannot be accessed.

If not, the transaction has been committed, so the version can be accessed.

If the transaction id of the record version you want to access is 110, which is larger than the maximum id 100 of the transaction list, it means that this version occurs only after ReadView is generated, so it cannot be accessed.

The read isolation level has been committed. At this time, you will re create a ReadView, and the value in your active transaction list will change to [110].

**Repeatable read isolation level. At this time, your ReadView is still the ReadView generated during the first select ion, * * that is, the value of the list is still [100].

The repeatable read isolation level generates a ReadView when reading for the first time, and subsequent reads reuse the previous ReadView

What problems can MVCC solve?

Optimistic locks are not built into the database, and we need to implement them ourselves.

Optimistic lock refers to the operation of the database (update operation). I am optimistic that this operation will not lead to conflict. When operating the data, I will not carry out any other special processing (i.e. no lock). After the update, I will judge whether there is a conflict.

2. Generate orders based on commodity information

3. Modify the commodity status to 2

Pessimistic lock means that when operating data, it is considered that there will be data conflict during this operation,

Therefore, each operation can only be performed on the same data by obtaining the lock,

This is very similar to synchronized in java, so pessimistic locking takes more time.

In addition, corresponding to the optimistic lock, the pessimistic lock is realized by the database itself. When we want to use it, we can directly call the relevant statements of the database.

Share (S) is used for operations that do not change or update data (read-only operations), such as SELECT statements.

By adding lock in share mode after the execution statement, it means that a shared lock is added to some resources

Used for data modification operations, such as INSERT, UPDATE, or DELETE. Ensure that multiple updates are not made to the same resource at the same time.

For update, insert and delete statements, exclusive locks will be automatically added

The default implementation of transactions in Spring uses AOP, that is, the proxy method. If you use code testing, you need to use the injected object to call the methods in the same Service class when calling each other. Do not directly use this Method name, this The method name call is an internal method call of the object and will not pass through the Spring proxy, that is, the transaction will not work