Understanding of classes in TypeScript

❞
Traditional object-oriented languages are basically based on classes. The prototype based approach of JavaScript makes developers have a lot more understanding costs

After ES6, JavaScript has the class keyword. Although it is still a constructor in essence, it is much easier to use

However, JavaScript class still has some features that have not been added, such as modifiers and abstract classes

The keyword defining the class is class, followed by the class name. The class can contain the following modules (data members of the class):

Field: a field is a variable declared in a class. Fields represent data about the object.
Constructor: called when the class is instantiated, it can allocate memory for the object of the class.
Method: the operation to be performed by the method object
Examples are as follows:

It can be seen that the above form is very similar to ES6. typescript adds three modifiers on this basis:

public: members defined in class programs can be accessed freely

private: it can only be accessed inside this class

Protected: in addition to being accessible inside the class, it can also be accessed in subclasses

It can only be accessed inside the class, and the instance object cannot be accessed 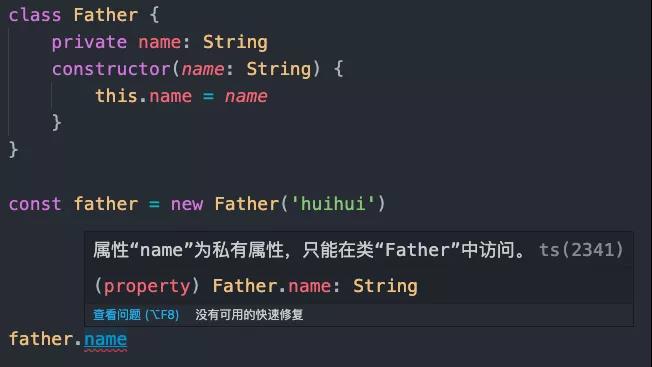 And subclasses that inherit this class cannot be accessed, as shown in the following figure: 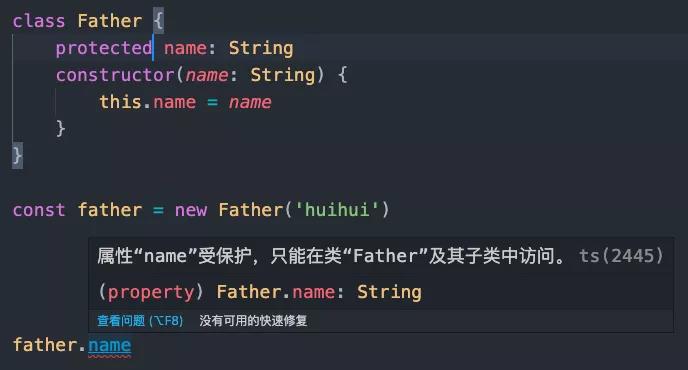 One difference is that protected members are still accessible in subclasses 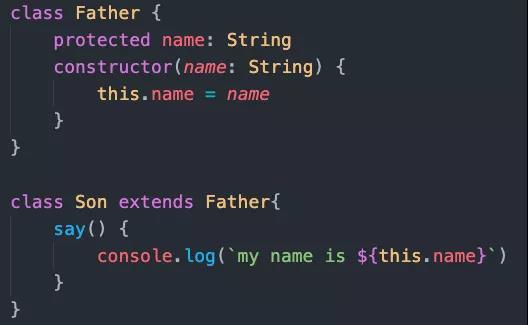 In addition to the above modifiers, there are read-only "modifiers"

Declared through the readonly keyword, the read-only attribute must be initialized in the declaration or constructor, as follows: 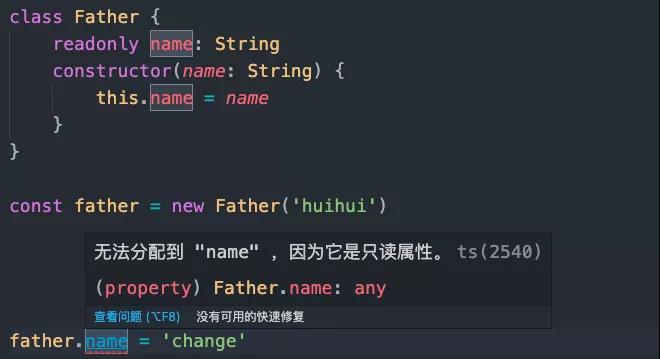 In addition to instance properties, there are also static properties

These attributes exist on the class itself rather than on the instance of the class. They are defined through static. Accessing these attributes requires the form of type. Static attributes, as shown below:

One feature of the above classes is that they can be instantiated. There is also an abstract class in typescript

Abstract classes are used as the base classes of other derived classes. They are generally not instantiated directly. Unlike interfaces, abstract classes can contain the implementation details of members

In addition to completing daily business codes with the help of the characteristics of classes, classes can also be used as interfaces, especially in React engineering, as follows:

Because the component needs to pass in the type props of props and set the default props, that is, defaultProps, it is more suitable to use class as the interface

Specify a class that contains the type and initial value required by the component props:

The example of Props is the initial value of defaultProps, which is the practical application of class as an interface. We use one class to play the two roles of interface and setting the initial value, which is convenient for unified management and reduces the amount of code