The first week mainly describes the basic grammar of C language, and the content is relatively simple; However, there are several challenging homework questions. This paper mainly records the class content and challenging homework of this week for self summary after class.

Find the common element codes of two ascending arrays a and B as follows:

2. Given an array a of n integer elements, where one element occurs more than n/2, find this element

analysis:
Idea 1: sort first and then find. But the sorting efficiency is very low;

Idea 3: make use of the idea of selecting people during the election; If there is a candidate with more than n/2 votes, the candidate has more votes than the sum of the votes of other candidates.
Candidate stores the currently dominant candidate, and priority represents the advantage of the current candidate; Set the initial value of candidate to a[0], and the initial value of prior to 0; Traverse the entire array from a[0].
The conditions for the end of traversal are: (1) traversal of a complete array or (2) the value of prior is greater than n/2.
If the current array element a [k]= Candidate, the advantage of the original candidate becomes smaller, priority-1; Otherwise, priority + 1. When priority = - 1, it indicates that the current candidate has lost the vote advantage, update candidate candidate=a[k], and set priority = 1.
This method only needs to traverse one side array a, and only needs constant level additional space. The time complexity is O(n) and the space complexity is O(1). 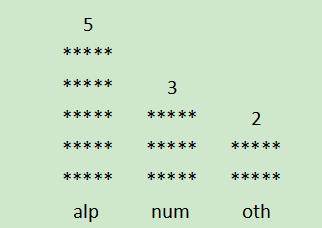 This question is not for the time being. It only counts the number of various characters. How to print has not been mentioned. Waiting for update~

2. There are 101 integers, of which 50 numbers appear twice and 1 number appears once. Find the number that appears once.

Analysis: use XOR operation: the XOR result of two identical numbers is 0; The result of the exclusive or of any number a and 0 is itself. XOR the numbers in the array in turn, and the result is the number that appears only once.

What kind of two piles are divided into: divide x and y into two different heapA and heapB, and make the same number in the same pile. The problem can be divided into two problems 2 1.
How to stack:

What kind of two piles are divided into: divide x, y and z into two different heapA and heapB, and make the same number in the same pile. Where there are two numbers in X, y and z in one heap and one number in X, y and z in the other heap. The problem can be decomposed into a problem 2 1 , one question 3 2.
How to stack (violent stacking, up to 32 times):

The code is as follows (only the code of heap splitting is included):

Day5 tells about the pointer, the transmission and nature of the pointer; Formal and arguments in functions.

1. Large integer addition. Realize the addition of two integers in any range (the range of integers cannot be represented by int variables, 50 bits)

Analysis: use the string to store the large integers a and b, then add them from low to high, and store them in the empty string c (note that the content stored in C is opposite to the result, and C should be turned over to get the correct answer)

Thinking: can we refer to the CLA four bit adder in the composition principle to generate four bit carry at one time instead of one bit from low to high?