LateNight: where? I use the local environment pytest to take you to play custom operators

Late at night: where? I use the local environment pytest to take you to play custom operators

Hello everyone, the python general testing framework is unittest+HTMLTestRunner. I have seen the pytest document during this period and found that this framework and rich plugins are very easy to use, so let's learn about pytest

[external chain picture transfer failed. The source station may have anti-theft chain mechanism. It is recommended to save the picture and upload it directly (img-djj2egar-1642483999727)( https://gitee.com/qmckw/pic/raw/master/PicGO-updata-img/6536777-74124be4a6b0a5fe.png )]

pytest is a very mature and fully functional Python testing framework, which mainly has the following characteristics:

First, we find a directory, create a new folder Pytest, and then create a new test_sample.py, enter the following.

As shown in the figure above, enter cmd in the directory bar (you can also run it directly in the IDE): 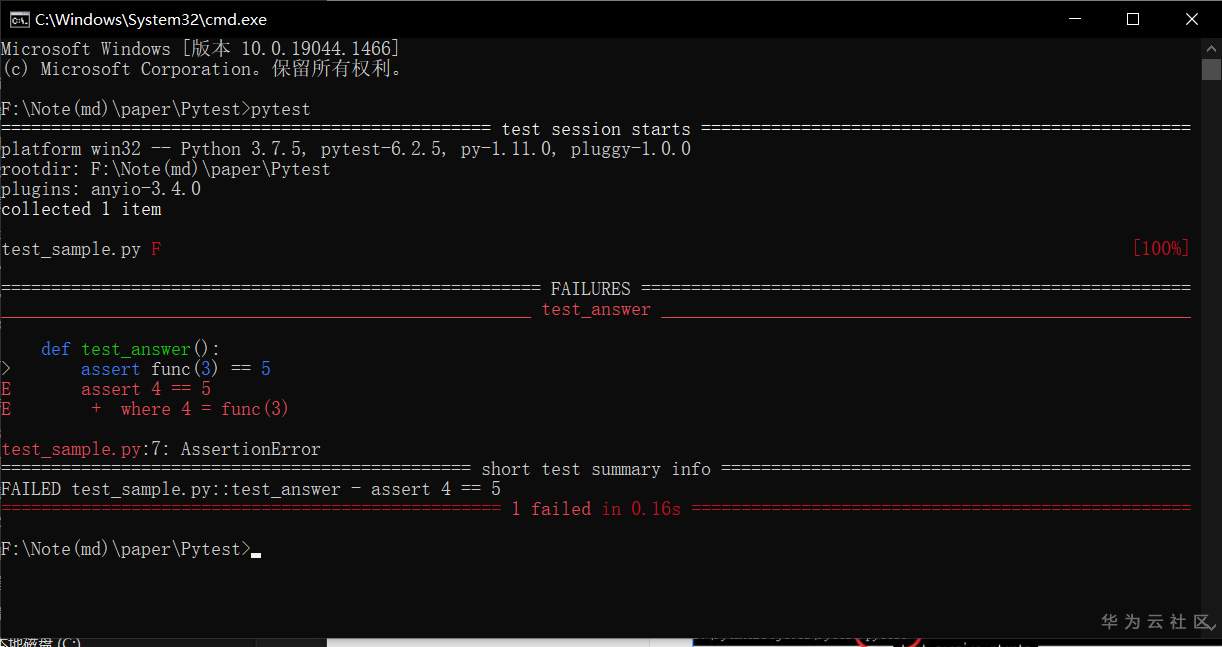 pytest returns an error report because func(3) does not return 5.

Example 2:
When we need to write multiple test samples, we can put them into a test class, create a new directory test, and create a new test under the directory_ class. Py, enter the following: 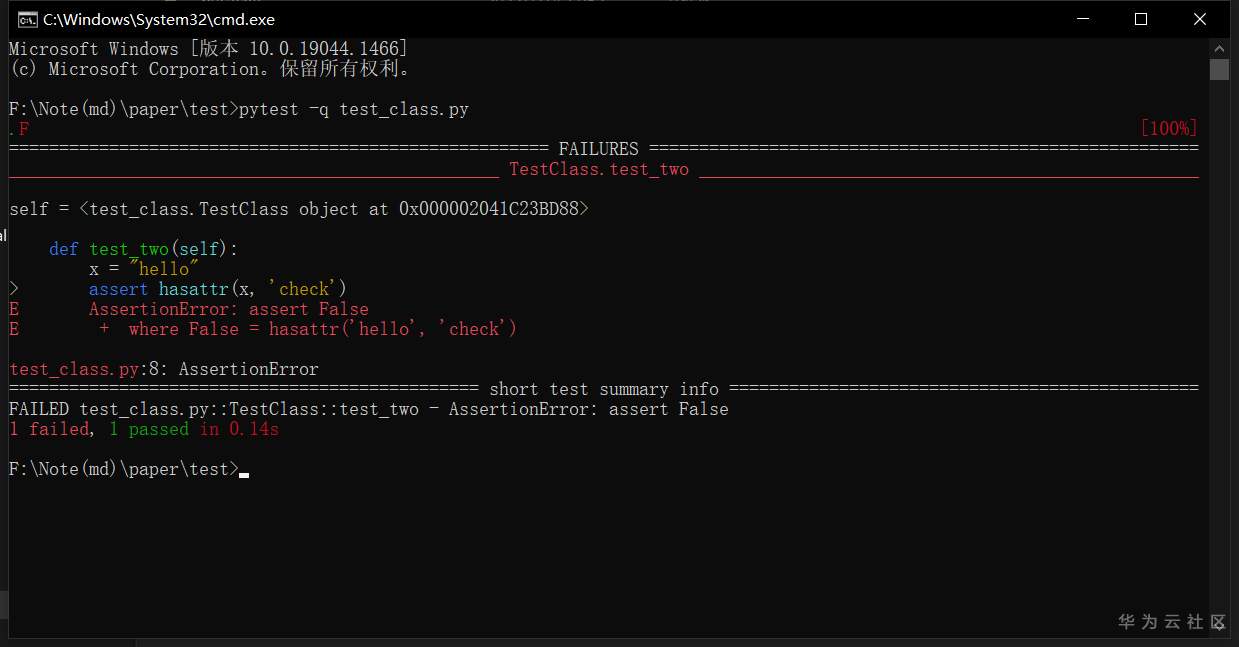 It can be seen from the test results that the test executed two test samples, one failed and the other succeeded. Similarly, we also see the details of the failure example and the intermediate results during execution- q is - quiet, which is used to reduce verbosity. Specifically, it no longer displays the version information of pytest.

How to write a pytest test sample

Through the above two examples, we find that writing pytest test test samples is very simple. We only need to follow the following rules:

A variety of operation modes of pytest make testing and debugging more convenient. Here are five common modes. It should be noted that there are naming requirements for the files running the test, otherwise additional command line instructions are required. The pytest command will find all test *. In the current directory and its subdirectories Py or*_ test.py format files and methods or class es starting with test, otherwise you will be prompted that you can't find a running case. 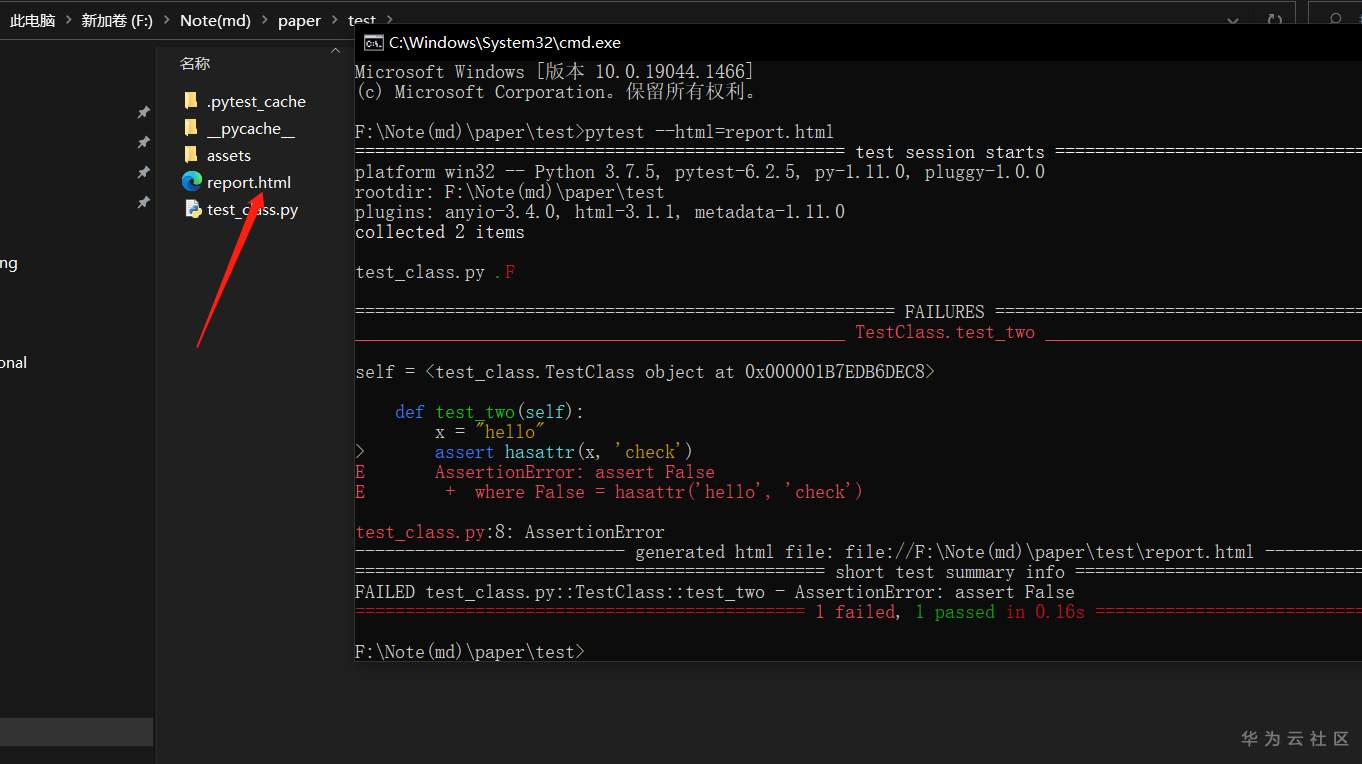 We can see that html files are generated in the directory. Click to see:

We can see the error report with very neat layout. In the above report, we can clearly see the test results and error causes, and it is easy to locate problems.

When we write more cases, it is undoubtedly a waste of time if we have to run them all every time. It is very convenient to run them by specifying cases. 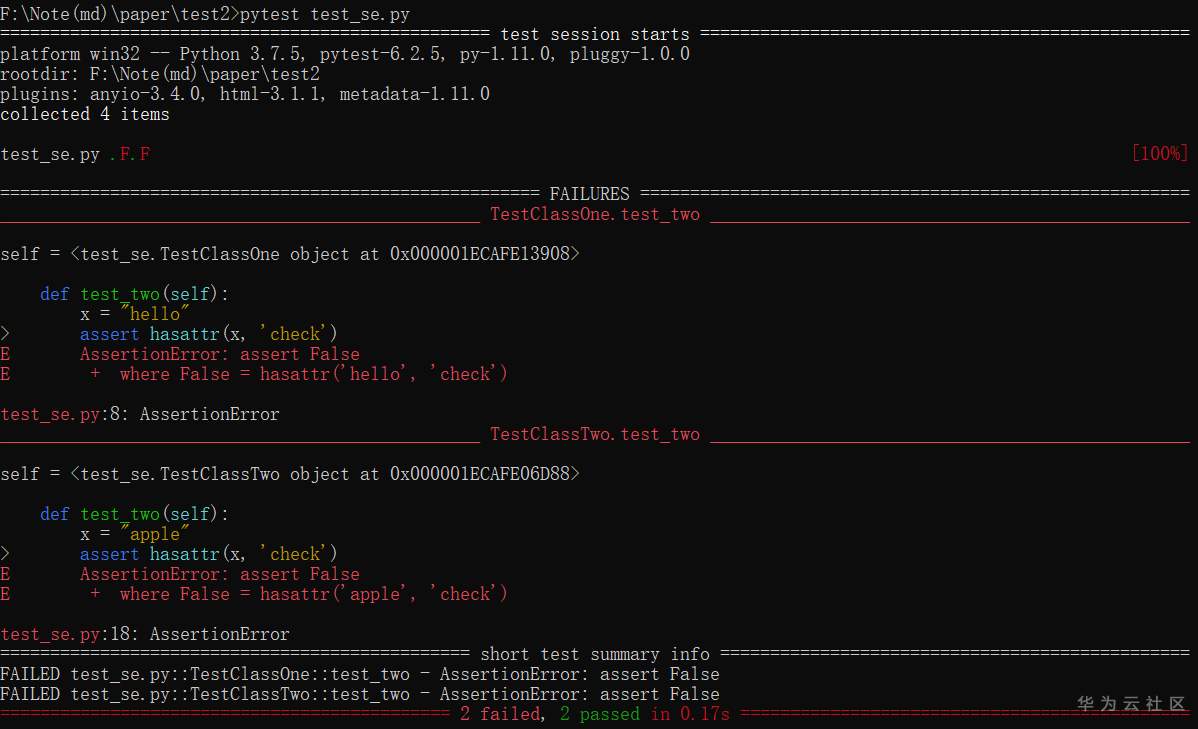 Mode 3: run test_ se. TestClassTwo in the. Py file is the test under this class_ one:

Note: when defining a class, it needs to start with T, otherwise pytest will not run the class.

We can see that the time of the three is decreasing.

Where NUM is the number of concurrent processes.

At the beginning, we spent 0.93s on two processes, 0.83s on one process and more than ten seconds on one hundred processes. When we test a small amount of code, multi process has no advantage.

During the interface test, we may encounter 503 or short-term network fluctuations, resulting in the failure of case operation, which is not the result we expect. At this time, we can solve it by running cases again.

NUM fill in the number of retries. 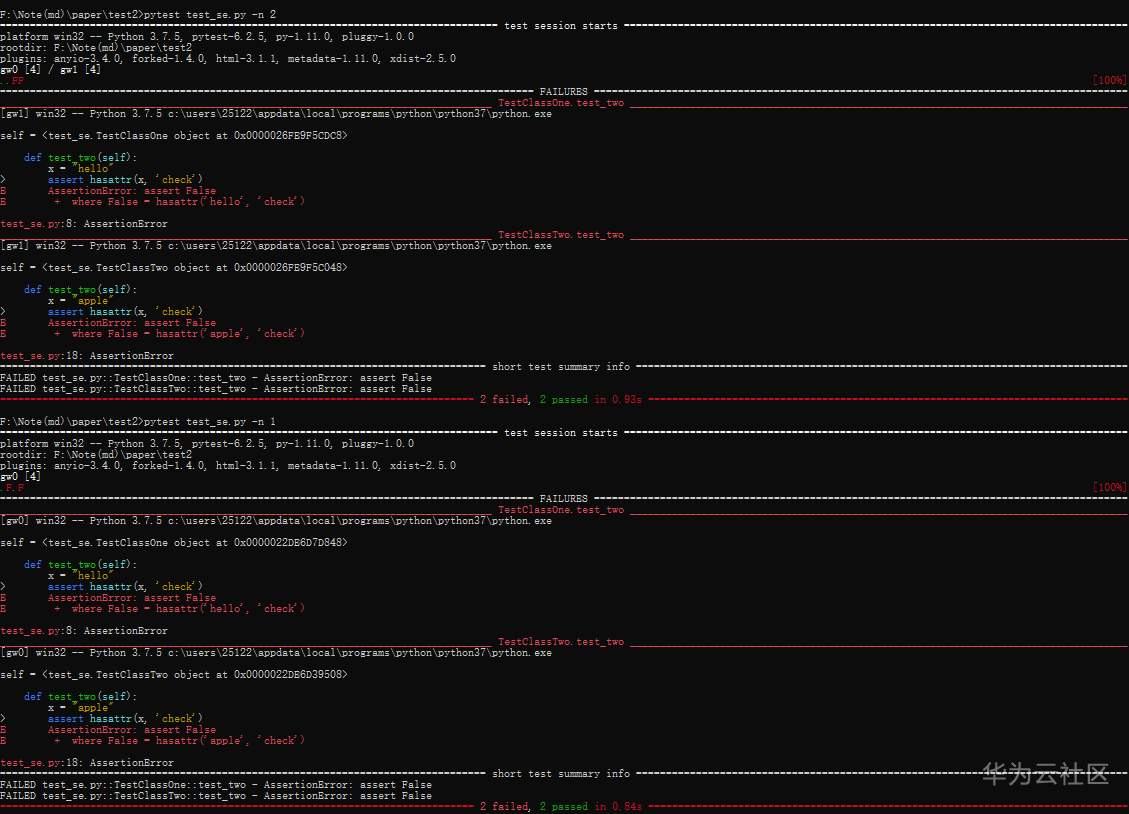 When running the test script, in order to debug or print some content, we will add some print content to the code, but these contents will not be displayed when running pytest. If you bring - s, you can display it.

In addition, various running modes of pytest can be superimposed. For example, if you want to run four processes at the same time and want to print the content of print. You can use:

pytest takes you to play with mindspot custom operator

For pre knowledge of operators, please read the reference documents on the official website: Mindspire operator

When the built-in operators are not enough to meet the requirements when developing the network, you can easily and quickly expand the custom operators on the CPU side by using mindspire's Python API and C++ API.

The custom operator is divided into three steps

The primitive of an operator is a subclass inherited from PrimitiveWithInfer, and its type name is the operator name.

The CPU operator primitive is defined in the mindspot / OPS / operations path. Select the appropriate file according to the operator type. The interface is defined as follows:

Taking the transfer operator primitive as an example, the following example code is given, where the decorator syntax is used.

The parameter "perm" in the transfer operator primitive is passed in as input, but the tuple type "perm" is actually considered as an attribute of the operator during parsing.

Implement CPU operator and registration operator information (here is for simple understanding only, see the official website for details)

Usually, for the implementation of a CPU operator, you need to write a header file and a source file. The file path is mindstock / ccsrc / backend / kernel_ Compiler / CPU, if the logical implementation of the operator is by calling the third-party library MKL-DNN, it will be placed in the subdirectory mkldnn. For details, please refer to oneMKL and oneDNN .

For details of the AnfRuntimeAlgorithm class, please refer to the mindspire source code mindspore/ccsrc/backend/session/anf_runtime_algorithm.h Statement under.

The Launch function in the source file first obtains the address of each input and output in turn, and then according to axis_ Transform the dimension and assign the value to the space pointed to by the output address.

The implementation process is not described in detail here.

Operator information is the key information to guide the implementation of back-end selection operator, Ms_ REG_ CPU_ The first parameter in kernel is the name of the registered operator, which is consistent with the operator name in the primitive. The second parameter successively indicates the type of each input and output, and the last parameter is the class name implemented by the operator. The registration code of the transfer operator is as follows:

After writing the custom CPU operator, you need to recompile and install mindcore. Please refer to Installation documentation.

Use custom CPU operators and test with pytest

After compilation and installation, the custom CPU operator can be directly used by importing primitives. The following takes the single operator network test of transfer as an example.

In test_ transpose. The network is defined in the. Py file.

Execute the use case (here we can see that using pytest is to test a function in one of the classes, and all of them start with test_. You can go back to the usage of pytest above to review): 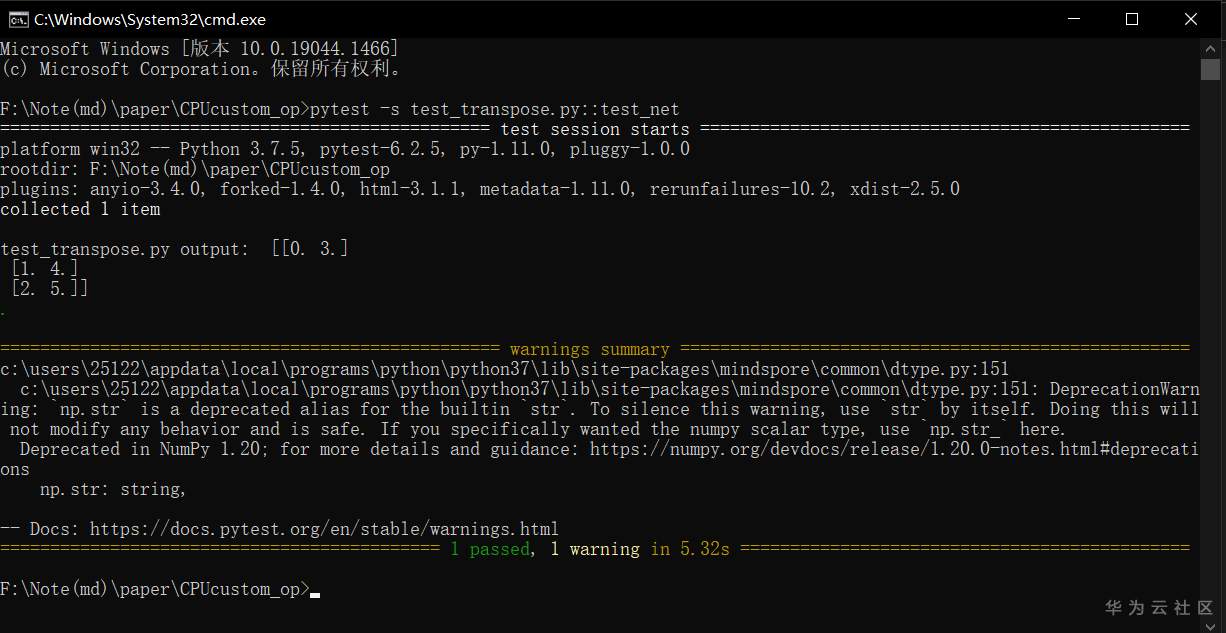 We output the report as html:

You can View html reports.

If the operator wants to support automatic differentiation, its back propagation function (bprop) needs to be defined in its primitive. You need to describe in bprop the reverse computing logic that uses forward input, forward output, and output gradients to get input gradients. Reverse calculation logic can be composed of built-in operators or custom reverse operators.

The following points should be paid attention to when defining the operator back propagation function:

For example, the reverse primitive of transfer is:

In test_ transpose. Add the following content to the PY file to define the reverse use case.