Why does Alibaba force you not to delete in foreach

That day, little ape went to Ali for an interview. As soon as the interviewer Lao Wang came up, he threw him an interview question: why is it mandatory not to delete elements in foreach in Ali's Java development manual? The little ape looked happy after hearing this, because two years ago, 2019   In, he saw this question in the column of the advanced road of Java programmers 😆.

For the sake of the town building, first move a paragraph of English to explain fail fast.

In systems design, a fail-fast system is one which immediately reports at its interface any condition that is likely to indicate a failure. Fail-fast systems are usually designed to stop normal operation rather than attempt to continue a possibly flawed process. Such designs often check the system's state at several points in an operation, so any failures can be detected early. The responsibility of a fail-fast module is detecting errors, then letting the next-highest level of the system handle them.

The general meaning of this paragraph is that fail fast is a general system design idea. Once an error is detected, an exception will be thrown immediately, and the program will no longer be executed.

Once it is detected that wanger is null, it immediately throws an exception and lets the caller decide what to do in this case. wanger.toString() will not be executed in the next step -- to avoid more serious errors.

The reason why we put fail fast in the collection framework is that the problem is easy to reproduce.

This code seems to have no problem, but it runs with an error.

According to the wrong stack information, we can locate line 901 of ArrayList.

In other words, the checkForComodification method is triggered when removing. This method compares modCount and expectedModCount, and finds that they are not equal, so it throws a ConcurrentModificationException.

Why is the checkforconfirmation method executed?

Because for each is essentially a syntax sugar, and the bottom layer is implemented through the Iterator and the while loop. Take a look at the decompiled bytecode.

Take a look at the iterator method of ArrayList:

in other words   new Itr()   expectedModCount is assigned to modCount, and modCount is a member variable of the list, indicating the number of times the collection has been modified. Because the list executed the add method three times before.

Therefore, the value of modCount is 3 after three times of add, so   new Itr()   The post expectedModCount value is also 3.

When the first loop is executed, it is found that "silence king two" is equal to STR, so it is executed   list.remove(str).

The value of modCount becomes 4.

When executing the second cycle, the next method of Itr will be executed (String str = (String) var3.next();), and the next method will call the checkForComodification method. At this time, the expectedModCount is 3 and the modCount is 4, so you have to throw the ConcurrentModificationException exception.

In fact, it is also mentioned in Alibaba's Java development manual that do not remove/add elements in the for each loop. Remove element, use Iterator mode. 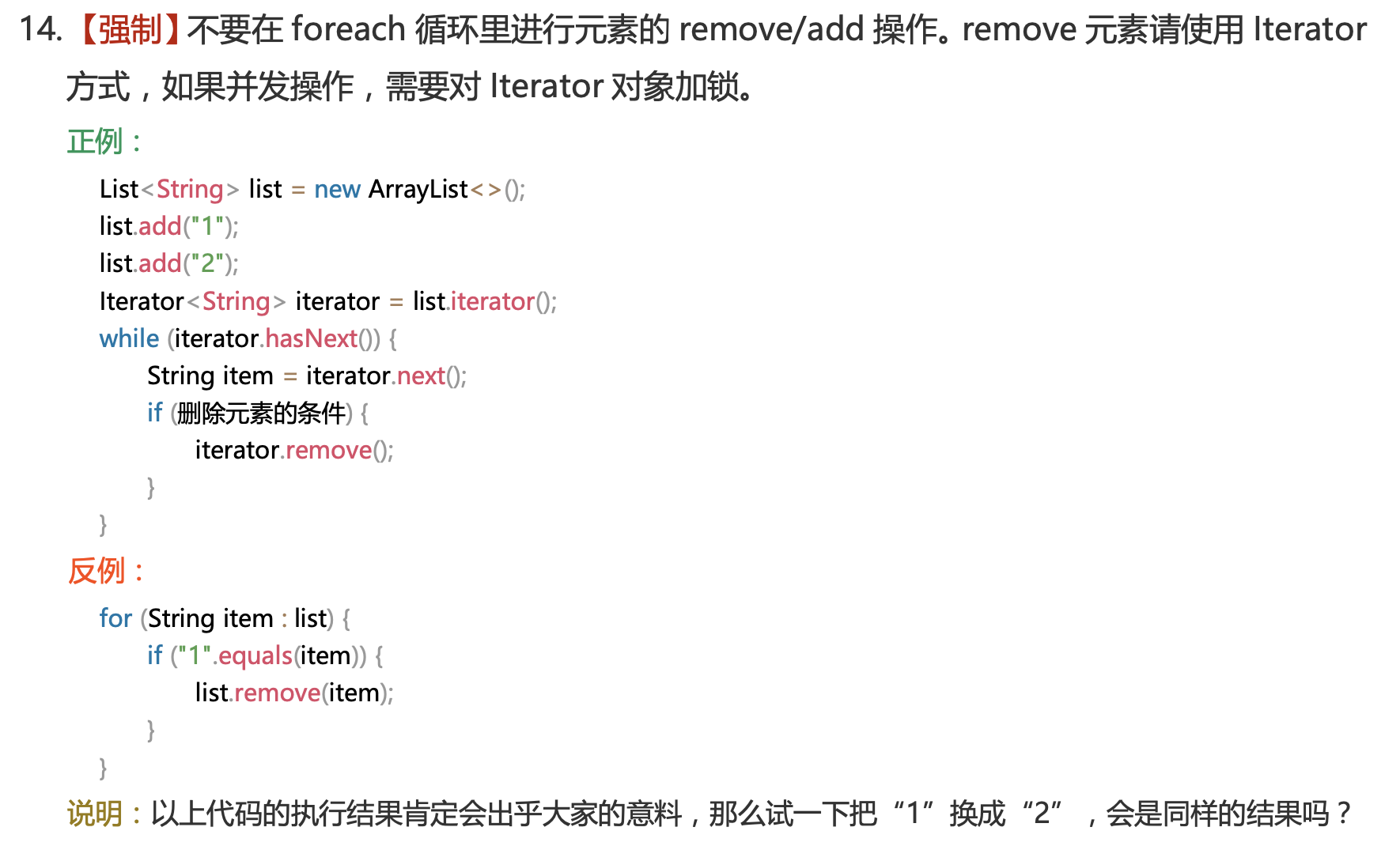 The reason is actually the above analysis, due to the fail fast protection mechanism.

How to delete elements correctly?

However, when there are duplicate elements in the List to be deleted, break is not appropriate.

Although the for loop can avoid the fail fast protection mechanism, that is, it will not throw an exception after removing the element; However, this procedure is problematic in principle. Why?

In the first cycle, i is 0 and list.size() is 3. After the remove method is executed, i is 1 and list.size() becomes 2. Because the size of list changes after remove, it means that the element "Qing Dynasty program ape" is skipped. Can you understand?

Why can the remove method of Iterator avoid the fail fast protection mechanism? Just look at the source code of remove.

To sum up, fail fast is a protection mechanism, which can be verified by deleting the elements of the collection through a for each loop.

In other words, for each is essentially a syntax sugar. It is very important to traverse the collection, but it is not suitable for manipulating the elements in the collection (addition and deletion).

This is the 63rd column of the advanced path of Java programmers. The advanced path of Java programmers is funny, humorous, easy to understand, and extremely friendly and comfortable for java beginners 😘， The content includes but is not limited to Java syntax, Java collection framework, Java IO, Java Concurrent Programming, Java virtual machine and other core knowledge points.

The PDF of bright white version and dark version are also ready to become better Java engineers together, Chong! 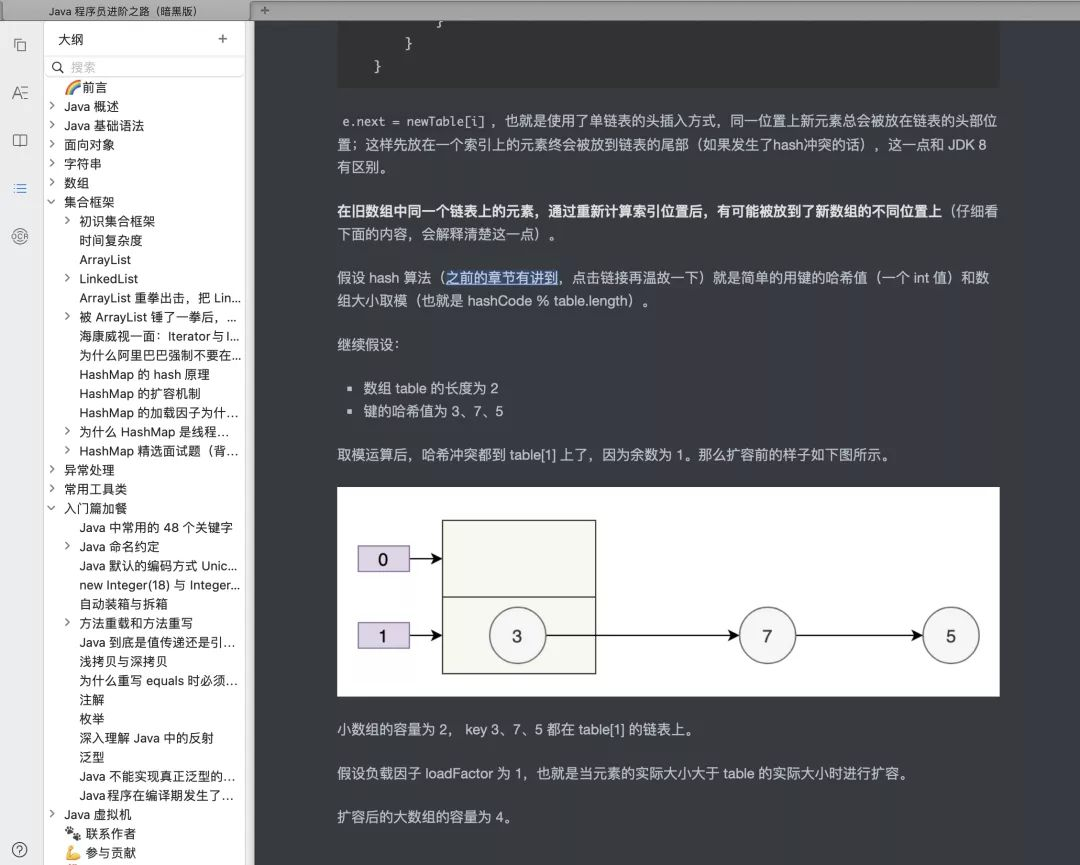