Tip: the following is the main content of this article. The following cases can be used for reference

Idea: first find the midpoint and divide the array into two regions, arr[L]-arr[mid] and arr[mid+1]-arr[R]

The midpoint of the above code is this line of code

Why use it like this? Can you write that?

If the midpoint is calculated in this way, there will be a problem. If the length of the array is relatively large, L+R may overflow

It can be seen from the recursive structure diagram that the final P (0,5) can be obtained only after all the child nodes are summarized. Therefore, the recursive process actually uses the system stack to stack the whole process. Suppose P (0,5) enters the stack, calls P (0,2), enters P (0,2) information into the stack, encounters P (0,1) during execution, and then puts P (0,1) into the stack, and so on. The space of the stack is the height of the whole tree.

This is actually the process of traversing a binary tree. 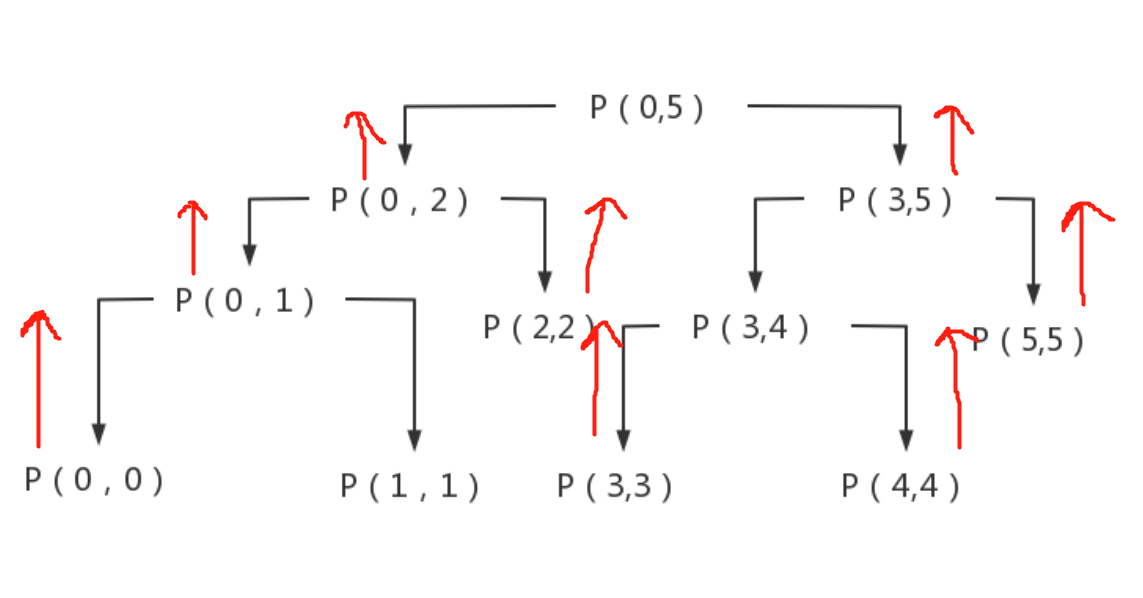 After debugging, it will be found that the recursive results of each layer are returned to the previous layer, so it can be regarded as a process of constantly summarizing from the bottom to the top

Master formula is a formula used to solve the time complexity of recursive problems.
The formula is as follows:

Note: the scope of application is the case where the scale of sub processes is equal, otherwise it is not applicable.

T[n]: the data scale of the parent problem is N
T[n/b]: the scale of subproblems is N/b
a: Number of times the subproblem was called
O(N^d): the time complexity of the procedure excluding the subproblem call

Therefore, the above function satisfies the master formula, and the time complexity can be obtained directly

Many people don't quite understand why the process is already in order. The recursive method is still used here, so the structure diagram is used to explain it

Therefore, merging and sorting is a simple recursion. In this problem, it also meets the requirements of master publicity. Its time complexity is:

The additional space complexity of merge sort is O(N)