Summary of the strongest sequence related macro operations in history

The following code is a natural code description of the execution process of the start() method. You can see the sequence relationship and conditions of their execution:

Here is start_ item()/finish_ The natural code description of item () indicates the execution sequence of relevant methods when sending item: 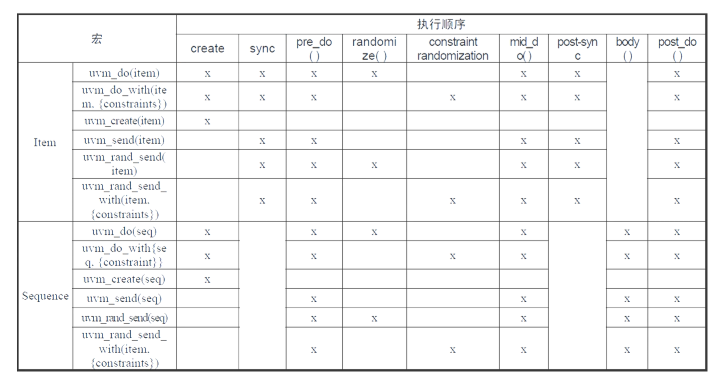 It is the way to win the world through several sequence/item macros. Users can

To send either sequence or item. This method of not distinguishing whether the object is sequence or item brings a lot of convenience, but it is also easy to cause the inertia of verifier s. Therefore, before using them, you need to understand the sequence and item sending methods behind them.

Different macros may contain the process of creating objects or may not create agile objects. for example

Object will be created instead of ` uvm_send will not create objects and will not randomly process objects. Therefore, it is necessary to understand their execution contents and order.

There are also other macros, such as those that pass priority as a parameter

And so on, there are special for sequence

Wait for macro.
The on function indicates that we want to specifically mount the current seq to an sqr

Finally, some suggestions on sending sequence/item are given:

Because start_ When item, it will wait_for_grant, once you get the permission and don't return, disable the whole seq violently in the middle, it may be too late to release the permission to sqr, and sqr may be deadlocked.

4, The arbitration mechanism of sequencer

uvm_sequencer provides two locking mechanisms, which are implemented by lock() and grab() methods respectively. The differences between the two methods are as follows:

Child here_ In SEQ, although two items are sent as above, there is an interval of 10ns between each item. Sending the first item is also delayed by 10ns

Focus on the author